Are You Ready For The Fourth Coming?

You read that right fellow, heathens! Seems a new Papa Emeritus will rise and convert us one by one through the infernal hymns Ghost does best. Two days after concluding their successful Popestar tour in New York, the video below was released. Ready or not here he comes…

“Get Your Boots On! That’s The End Of Rock And Roll!” *pants* Okay, okay it wasn’t that long but still, we get it Rob…Actually we don’t but whatever. Incoherent and never ending titles aside, the 2 minute and 47 second music video is concert footage that was shot with great quality and has a lot of pretty lights. Check it out.

In Devildriver We ‘Trust’

Devildriver may not trust us but after watching the video for “Trust No One,” we’d beg to differ. The video was shot at Ozzfest Meets Knotfest, which took place in late September in San Bernardino, and shows the grittiness and die hard enthusiasm one sees in a festival. So if you missed Devildriver’s show in San Diego in June or were among the 10 metalheads (us included) that didn’t go to Ozzfest, never fear! This video is here.

By releasing not one, nor two BUT THREE MUSIC VIDEOS IN ONE DAY! Metallica will release a batch of videos every few days on their YouTube channel for their 12 song playlist. This artistically ambitious trend has been quite the reward for fans and as of now (Nov. 20), there are 10 out 12 Metallica promoting the album Hardwired… to Self-destruct. I’ll hold off on having this post become a Metallica mural, BUT I will post their first release “Dream No More” and the link to their YouTube channel. You’re welcome 😉

Watch “Dream No More” down here:

Metallica Is Far From ‘Unkind’ With Their Video’s Big Reveal…

Okay maybe I will technically post another Metallica video in this post, but this one is extra special. Not only did they unveil their Black Metal homage “ManUNkind,” turns out the video is THE sneak peek to the bio pic on Norwegian Black Metal legends Mayhem, Lords Of Chaos. Gone are the days of speculating which actors were casted in what roles and though hearing a Metallica song in a Black Metal scenery is a bit out of place, it was a nice surprise!

Here’s a closer look of Mayhem in the upcoming Lords of Chaos film which is currently in production.

“ManUNkind” gives us a first look at the cast of “Lords Of Chaos” the Mayhem io pic.
(Jonathan Barnwell as Necrobutcher, Jack Kilmer as Dead and Rory Culkin as Euronymous 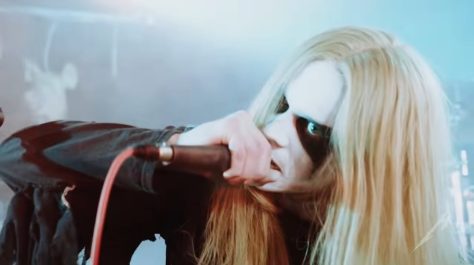 “ManUNkind” gives us a close up of Jack Kilmer as Dead, in the upcoming film “Lords Of Chaos.”

The wait is over for Kreator’s new music video for their first single “Gods Of Violence.” No longer will we toss and turn asking ourselves, what is Kreator’s video all about!? Especially after the badass set pics they teased us a few weeks ago. This devilish story is the first from a planned trilogy directed by the renowned Polish production company Grupa 13 (Behemoth, Amon Amarth) and here we are desperately waiting for the next set of videos to drop. Gods Of Violence will unleash its wrath on January 27 via Nuclear Blast Records, but till then enjoy!

Off of their latest EP The Duke, these renowned gents unveiled “Culling.” The track will satisfy any LoG withdrawals you maybe be suffering from. The amazing EP (trust us on this one) is out now and proceeds of the signed version of The Duke along with a selection of other special items available for purchase, will be donated to the Leukemia and Lymphoma Society.

Get That EP Here: https://www.lamb-of-god.com/lamb-god-release-duke-ep/