Editor’s note: MUWHAHAHAHAHA! It’s back to whack it!… wait wat?…..

These Never Get Old

‘The Evil Mind’ Will Posses You

Surgat just keeps getting extreme especially with their recent single “The Evil Mind.” This track is far more lit than any hell fire and more aggressive than Saytyn itself! You can buy this single now at Bandcamp now and be sure to stay tuned with what they’ll do next and give them a like!

Bored after a long day at the job and wanna do some late night noodlin’ on your faithful guitar? Well this playthrough courtesy of Greek metallers After Dusk will give you something to do and add a touch of epicness to you night. Guitarist Bill shreds till the very end of this playthrough for their track “A Corpse With A Smile,” which is off of their latest album The Character of Physical Law. Because I know you’ll fall in love with this track, get your copy of the album here!

Gurschach To Puzzle With ‘Dark Matter’

San Francisco experimental band Gurschach is ready to defy the “norms” of metal and will release their debut album Dark Matter on Dec. 1. The best part about this entry is that they have released their first single the ritualistically hip “Undead Empire.” Besides this track having a badass title to it, it will keep you on your toes especially once you are greeted with that build up.

If you haven’t listened to these guys before, then you’re in for a different type of flavor because this quartet ain’t afraid of standing out and mixing all sorts of wonderful musical elements. That’s right, these guys are a wild card through and through. Check out the rest of their material in their bandcamp and prepare yourselves to be amazed!

This One’s ‘To Your Brethren in the Dark’

Satyricon are at it again and have delivered yet another bad ass music video for their track “To Your Bretheren In The Dark.” This half monochromic, half Technicolor visual is the perfect complement to this hellish and suspenseful Grimm tale. And yes I may have watched a few times by now… Check it out below and see why! Be sure to snag a copy of their latest album Deep Calleth Upon Deep and if you’re uncertain, see what we thought about it.

I’m sure all of you are well aware of this scandal so I won’t really get in to it yet and there’s not much of a development so far. All yours truly is gonna say is goddamn this is all still so surreal. It’s important to remember two things, it’s important to stay neutral BUT MOST IMPORTANTLY, slut shaming and victim blaming is beyond low and is a cancerous tumor in our society. Don’t feed that tumor, no one likes that shit.

Co-founder and original guitarist Daisy Berkowitz, whose real name was Scott Putesky, succumbed to stage four colon cancer at age 49. Putesky can be heard in the first two Marilyn Manson albums Portrait of An American Family and Smells Like Children before departing in 1996 due to creative differences.

Marilyn Manson took to Instagram to commemorate a picture Putesky and shared an old image of them during their younger days in the band stating that though they may have had their differences, he still remembers the good times they had. Our deepest condolences to Putesky’s family and friends and the Marilyn Manson camp.

Judas Priest Will Bring Their ‘Firepower’

Ya think these legends were gonna slumber and chill forever you are wrong! Nothing can stop Judas Priest and guess what, they will be producing a new studio album titled Firepower in early 2018 via Sony AND a tour! Be on the lookout for pre-order deetz! In the meantime check out the cool promo poster for their tour! 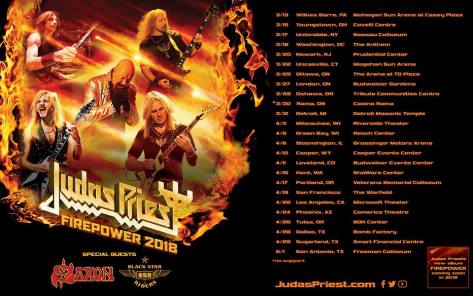 Goth rockers Moonspell pay homage to their Spanish speakers with their single “Desastre” (“Disaster”) which will be included in their upcoming album 1755 which is due on Nov. 3 via Napalm Records. The track lives up to its name by emphasizing the direness of the situation and is particularly heavily loaded on riffs and aggression much like a disaster would be! Check out the track below and preorder your copy here!

Blutengel Will Speak To Your ‘Black’ Heart With Video

Legendary goth bad Blutengel has released an unholy(-ly?) delicious music video for their track “Black.” This ode has a heart of gold and will seduce you in to buying the rest of the album Leitbild which is out now and you can get here and listen to it on Spotify. It would be a sacrilege if you don’t check out this video.

Here we are again talkin’ about the Klown’s compadre Johannes Eckerström and his band Avatar…okay you’re right we have not spoken about our unforgettable night with Avatar on Oct. 22 but we will! But guess what, for those that missed out on the show can now enjoy this super fun video for their latest single “A Statue Of the King.” This brand spankin’ new single will be included in their upcoming album Avatar Country out on Jan.12. Buckle up for this adventure and buy your ticket to Avatar Country here! But in the meantime, get your ticket here and stay tuned ‘cause we ain’t done talking about these lovable freaks!

Cavalera Conspiracy Are Sorts of Savage With Their Latest Single

The Cavaleras are back and gracing our site but this time no epic show, boo! But the good news is that we’ll be seeing a whole lotta Max again along with his brother, drumming extraordinaire Igor and their side project Cavalera Conspiracy! They unveiled their second single “Spectral War” for their Nov.17 sophomore album Psychosis which will be released via Napalm Records.  Cavalera Conspiracy’s second go is shaping up to be a brutal album so far and we can’t wait! Pre-order your copy here and check out what I’m talking about!

The Adicts Give Us A Colorful ‘Scene’

Our favorite jokers are back with another feel good theme song “Picture the Scene” which is off their Nov.17 album And It Was So! Which will be released via Nuclear Blast Records… yes you read that right though don’t be so surprised Timmy, that’s old news! But you know whats will not get old? This cheery little track and The Adicts! Check out the video below and preorder your copy here.

That’s right, the J-Ohster’s talking about Moonspell again! So what of it punk! And I know you will be glad I did especially after I tell ya that their now streaming their upcoming album 1755 in its entirety via Team Rock. Fun fact abotut his album is that Moonspell will sing in their native tongue, Portuguese, aside from their Spanish track “Desastre.” Now I ain’t gonna go too much about this baby ‘cause you’re gonna have to wait for the Trials for this one but I will go ahead and slip into you DM’s and drop this link here.  You’re welcome!

No I’m not talking about Bill Nye…this time  I’m talking about legendary Black Sabbath drummer Bill Ward! Ward has a little surprise for us and will launch a mini tour this December with his band Day Of Errors and guess what?! He is stopping by in our little hell hole! The trio made their live debut last year at the Gaslamp in Long Beach and are ready to hit the road. Check out the dates below and get excited!