Here in Ugh Metal, we believe in many things. What sorts of things? Great question! We believe that Cthulhu will rise again, that someday we’ll implement a real deadline and have integrity, and that “Satan Is Real.” For our devotion to the metal gods, we were rewarded and saw THE foggy red stage lights on March 25! Our Kreator showed themselves to us, defending the faith and made every metalhead within the dark walls of Santa Ana’s Observatory validate their beliefs in them! Moments before our Kreator showed themselves to us, their loyal disciples stirred the faithful in this sold out sermon.

Horrendous was far from it and serenaded the sea of restless souls with soothing melodic DEATH METAL! The (super brief and somewhat suspenseful) synth keys from “The Stranger”  played in the darkness till the slow opening riffs from soon followed creating a smooth build up. The quartet from Philly soon picked up the speed with “Acolytes,” spewing out fairly faster tempos and more riffs and with Damian Herring’s and Matt Knox respectively interchanging growls and licks. While they let their instruments take the wheel, they felt metal’s unholy spirit course through them and burst with tremendous energy rightfully marking the stage.

While most “popular” death metal charges like a rabid audible hellhound you saw coming miles away, Horrendous slithers in slowly. The creature from the Horrendous lagoon is a siren, slowly luring you in and seducing you with their beautiful melodies till it unleashes an unforeseen but silky scorn. For those who have an acquired taste for instrumentals sprinkled with some brutality rather than the raw jackhammering version of death metal, these guys are just what you need in your life.

Midnight, on the other hand, wasted no time and cut to the chase getting the sleazy black metal party started. The acclaimed hooded trio gave it to us good and left us wanting so much more, that it made us “Evil Like A Knife.” The leather clad (but shirtless ;D) Jamie “Athenar” Walters teased us a little when he announced that they’d be doing a cover “on Midnight,” revamping “Satanic Royalty” to “California Royalty” to praise the wild reception from the Golden State. Athenar once again flung a juicy chunk of black speed metal to the starving pit where it was devoured it as whole.

We were living before AND after Midnight!
(L to R: Henchman drummer 1, henchman 2/ guitarist, vocalist/guitarist/overlord Jamie “Athenar” Walters)

Throughout their entire performance, Midnight had instantly transformed the pit into a savage whirlpool of mayhem even when he belted out the romantic odes “Endless Slut” and (yours truly’s favorite) “Lust, Filth and Sleaze.” *Swoons*…oh, right you’re still here. When the elusive guitarist and Athenar weren’t unleashing their orgasmic guitar licks they were buzzing around the stage or standing on the speaker towering over the masses. By the time the trio wrapped up their set after they sacrificed an old guitar, it felt like time had flown too fast. Midnight left us hot and bothered as the observatory chanted their name.

Midnight may have kicked the hornet’s nest, but Obituary fanned the fiery pit. The death metal veterans fueled the fire and busted out the big guns with their classic “Internal Bleeding,” followed by “Chopped in Half” AND transitioned into “Turned Inside Out.” I’ll let that soak in if you’re feeling all sorts of emotions… okay that’s enough I know it’s overwhelming but we’ve gotta to move one. Yes, Obituary knew that they had to start off with a bang on this sold out show by using their brutal classics, but they also gave some love to their latest and greatest efforts yet. Obituary’s current single “Ten Thousand Ways To Die” and “Sentence Day” made an appearance shining the spotlight on their latest self titled album.

To those that have yet to be exposed to Obituary’s goodness, vocalist John Tardy may seem tame with his chill pacing or when his pensive gaze quietly absorbs the madness in front of him, till he lets out his signature thick screeches and starts headbanging with the rest of the band. These pioneers ended their set right where they started with “Slowly We Rot,” which we can assure you we didn’t especially with their fresh and invigorating set.

With a thick veil of excitement looming over the packed venue, Kreator befittingly had the playback for “Choir of the Damned” play within the walls to their legions as they got into position on the dark stage. The thrashers kicked off their night with the perfect song for the ferocious pit, “Hordes of Chaos,” followed by “Paranoia.” To keep the hysteria and our faith alive and well, Kreator belted out the anthems “Satan Is Real,” and “Gods of Violence.”

Vocalist Mille Petrozza was vocal about his gratitude throughout the night sharing his excitement to be in California and saying “Muchas Gracias!” giving him more street cred than he already has. As headliners of the big Decibel Tour and as living breathing thrash legends, they didn’t stop there, no, that was only part one of their four intermissions. Kreator still had more tricks up their guitar strings and was only getting warmed up in their whopping 18 song set list. 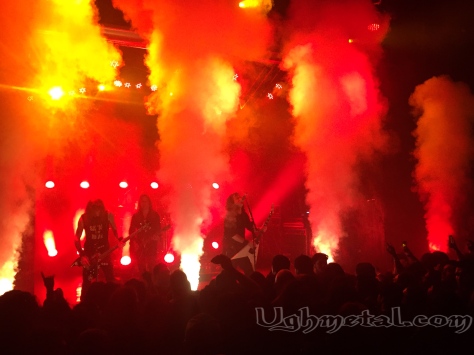 Let there be fiuuuuurrrrr!
We saw our Kreator and we believe!
(L to R: Bassist Christian Giesler, guitarist Sami Yli-Sirniö and vocalist/guitarist/metal god Mille Petrozza)

Throughout the night, Petrozza enjoyed shredding alongside bassist Christian Giesler and then make his way to guitarist Sami Yli-Sirniö, making their fun airborne. Kreator continued to make the night memorable by resurrecting more classics such as “Extreme Aggression,” and paid his respects with “Fallen Brother,” paid tribute the “Phantom Antichrist,” “Enemy of God” and busted out the smoke machines for “From Flood into Fire.”

On the last intermission of the night, Petrozza busted out THE actual flag of hate and serenaded it with “Flag of Hate.” Kreator, much like Obituary, ended their fantastic set with a classic “Pleasure to Kill.” This retelling of that night does zero justice to the superb show these legends delivered, and the same goes for naming each and every song they performed. Seeing Kreator was believing and reminded us why they are the almighty. Petrozza proclaimed he would return, and his promise echoed in the packed venue and in our ringing ears, we’ll be waiting for the second coming!