On February 23, the pastor known as Mike Muir and his posse came to Ugh Metal’s humble abode and neighborhood where they converted the Observatory in North Park into their church. It was a night that truly kicked ass which had another legendary group know as Crowbar and one working on their legendary status (A.K.A Havok). Most importantly if this is the final round for Suicidal Tendencies, at least Ugh Metal had the pleasure to experience them. So without further ado, the Klown shall indulge you on what happened on that sold out show.

First up, the thrash quartet known as Havok indulged us with thrash reminiscent to that of the 80’s and similar to the likes of Exodus. Havok kicked us off with “Point of No Return,” which seemed like a rather appropriate song to get shit started. Once frontman/rhythm guitarist David Sanchez let loose those pipes, we knew we were in for a treat. Worth noting, Sanchez vocals sounded similar to that Exodus’s Steve Souza. 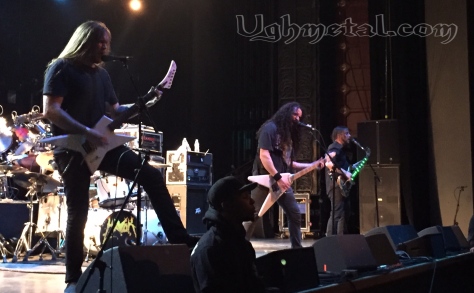 The thrashers also treated us to a sneak peek (which also served as an incentive) of their upcoming album Comformicide and played “Hang’em High,”“Claiming Certainty” and “Intention to Deceive.” Lastly, this quartet rounded up their time with the very awesome thrash anthem “Give Me Liberty… or Give Me Death.” It was a fucking treat seeing these guys live, they did a great job setting the tone and definitely had shit going from there on out.

After the gents from Denver cleared the stage, the legendary quartet from NOLA cooled our jets a bit to save some energy. Once Crowbar front man Kirk Windstein got on the mic and announced that they were going to kick our ass, we all knew that they meant business. They proceeded with our ass kicking with “Burn Your World” and followed up with “High Rate Extinction.”

The crowd got more riled up once “Walk with Knowledge Wisely” and “New Dawn.” Crowbar covered Led Zeppelin’s “No Quarter,” which sounded bitchin’ and awesome live because they knew how to incorporate their brand of sludge into this cover proving why they are the pioneers this sub genre. Of course, this Crowbar show wouldn’t have been complete without “Like Broken Glass” and capped off their performance with Mr. Meeseeks theme song, “Existence Is Punishment.”

Worth noting before the Klown moves on to the headliners, Crowbar, surprisingly didn’t perform any songs from their latest album like he thought they would. Mainly because the Klown expected to hear “I Am The Storm” or “The Serpent Only Lies” and because their latest album The Serpent Only Lies came out four months ago. Other than that it wasn’t disappointing at all! The Klown and the rest of San Diego hope to see these gents again in the near future.

Funny story about the Suicidal Tendencies show, the Klown thought that the Finest City wasn’t going to top or outdo Santa Ana! The Klown and the Ugh Metal team were glad to be proven wrong! The Klown especially knew that we were in for a treat the moment one of their roadies became the hype man. The moment felt magical as Mike Muir made his way to the stage right after his introduction. Naturally, Muir’s sermon started with the anthem of positivity, “You Can’t Bring Me Down.” Right from the start, guitarist Jeff Poogan and bassist Ra Diaz were as infectious and energetic as Muir himself. If it wasn’t Muir in the spotlight it was Poogan or Diaz trading places with him.

Stay tuned for The Passion of Mike Muir: Part 2?

The show got pumped when “War Inside My Head” was performed which only grew crazier and unexpected when Muir invited his best friend and San Diegan skateboarding legend, Dennis Martinez to share the spotlight with him. On stage, the frontman expressed his gratitude for the skating community and congratulated Martinez for being inducted into the skateboard hall of fame. Muir then celebrated by inviting skaters to join him on stage and mosh during their performance of “Possessed to Skate.”

After the skater pit cleared, we got another pit on stage going for “I Saw Your Mommy” where Muir briefly descended  and handed out high fives and greetings to fans on the guard rails. The Klown felt fortunate to be among those he high fived and greeted. The Klown would have felt a tad incomplete without hearing “Institutionalized,” luckily that wasn’t the case! Of course a bit of a sermon was given by Pastor Muir about living life to the fullest and being true to you. Y’know, it’s the type of inspirational and motivational speech that would make Tony Robbins blush.

Diaz fueled the hype by having fans shout “ST!” for the chorus line to do our “Pledge of Allegiance” properly. Before the grand finale, Suicidal Tendencies treated us to an extra song that summed up Muir’s words of positivity and presence that radiated off of him with “Living For Life.” This truly was an amazing show, the Klown and Ugh Metal felt fortunate to have been there and experience a Suicidal Tendencies concert. For those who couldn’t make it or didn’t know, if decide to tour again and comeback be ready! The Klown recommends it and it will be worth it!