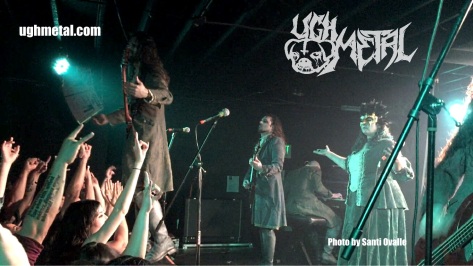 Fleshgod Apocalypse gave the Klown a Chinese New Years to remember a little over 2 months before Ugh Metal came to fruition.

Hey mothaluvas, it is The Klown inaugurating the newest segment which we called Postmortem. To kick this off, the Klown thought he would start with how the Klown helped ring in the New Year two years ago (2016). It was Chinese New Years to be exact but it’s a still new year celebration nonetheless. The Klown would also like to issue apologies in advance if he seems to cut it short when it comes to talking about the bands that performed that night. On the night of February 23, the lineup consisted of six bands in total. The Klown went solo to the Brick by Brick to see this line up of awesomeness which was also presented by the perennial metal e-zine site, Metal Injection.

The night kicked off with the sextet, at the time, from Menifee known as Helsott. It is worth noting that it was the first time The Klown saw them perform. This was also the show in which the Klown mentioned in his previous article, y’know… the one that was about Primal Fear and Luca Turulli’s Rhapsody *cough* check it out! *cough*. At the time of their performance, the band was without a female vocalist, despite that loss, the collective showed no signs of slowing down and started their night with “Vandals Divide” and finished the night with “Agamemnon.” It was a night where The Klown was immediately convinced of Helsott’s continuous rise. As we all know, a lot has happened for Helsott since then and the Klown is glad to have seen them rise. If you haven’t kept up, they’ve been signed with the rising M-Theory Audio Records. 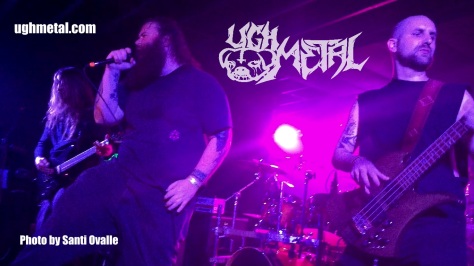 The mighty Helsott before M-Theory Records snagged them!

After Helsott cleared the stage, the night continued with the local melodic death metal act, Theosis. This local quintet is a myriad of our beloved genre and was a treat to behold. Theosis had the ability to switch between thrash, speed and grind. That night, they treated us all to “Bury Your Dead” and “Despise The Obsession” just to name a few. This band also had the talent to create a very calming atmosphere. Aside from the crowd having fun and headbanging to  the band , frontman John Haskins and their then drummer Omar Gutierrez, displayed a lax and cheery attitude that was contagious.

Haskins along with Shane Sarpy’s bass created a powerful combination that kept the crowd pumped and clamoring for more. They were definitely a treat to bestow upon. Although the Klown hasn’t seen them since, he has definitely kept up with them as much as he could. Two of the most recent shows since their reemergence was being a part of the round one of the Wacken Open Air Battle of the Bands USA this year and joining Voices Of Ruin at The Merrow back in April just to say the least.

Theosis having a great time and giving spectators the best of all world!

Helping keep the ever-increasing enthusiastic masses, was a local whose death was greatly exaggerated: Mortuus Terror. For those not aware of Mortuus Terror’s return, they were back and with some new blood in their lineup. The current lead singer is a bro known as Mondo and his vocals are brutal AF. The band kicked off their performance with “God Riddance,” not only was it catchy as hell but in true death metal fashion was on par to that of Cannibal Corpse and Deicide.

The night got more outrageous when they dedicated a song to the ladies called “Devirginized.” It didn’t matter whether it was male or female, the Brick went stir crazy and managed to make a big pit. They were a gem worth keeping your eyes and ears open for but sadly, the collective has disbanded since then.

Mondo of Mortuus Terror gave the crowd an earful with their brand of death metal.

Mortuus Terror left us all hungry for more and filled the Brick with more adrenaline while they waited for Abigail Williams to take the stage. Despite the fact that we had just gone through three bands, the excitement still loomed. Although it was a rather slow start, Abigail Williams debuted some new material such as the song “Beyond The Veil”, which was first promoted as a new track at that time for a brand new album. The very last time Ugh Metal spoke about the black metal collective was twice since this particular date in the same year.

The black metal segment of the night continued even after Abigail Williams cleared the stage. The Dutch horror black metal titans known as Carach Angren took the stage, and gave all in attendance a twist on what the Brothers Grimm could not do: make fairy tales more metal than they could have been. The quartet started with “Once Upon a Time” as their opener and later performed “Lingering in an Imprint Haunting.”

As the night continued,  frontman Sorceron donned a skull mask over his corpse painted face prior to the beginning of “Spectral Infantry Battalion” during which the Brick had a brief sing-along taking place. Die hard fans sang along and joined new fans in headbanging and moshing till their heart’s content, especially once “Sighting Is Portent of Doom” and “When Crows Tick on the Windows.” Unless you live under a rock the Dutch collective released an album last year and still tour.

Carach Angren sprinkled a little bit of Halloween in to this February night.

Once Carach Angren finished on a high note, the hungry crowd got what they asked for. With just a little over 2 weeks after their latest album King was released, Fleshgod Apocalypse took the stage and treated us all to a royal treat fit for a king. Much like the album, the band started with the intro “Marche Royale” and transitioned in to “In Aeternum.” In commemoration of their new record, the Italian collective performed their first hit from that album, “The Fool.” The band also showcased a bit of their culture by having their opera singer join in. Yes, they have an opera singer named Veronica Bordachinni touring with them and she let out her powerful soprano vocals for the “Epilogue” performance.

Of course, it wouldn’t be a complete Fleshgod performance without “The Violation” and “In Honour of Reason” from The Agony and Oracles album, respectively. The night ended appropriately with “The Forsaken” for that’s how the Klown and the rest felt when Fleshgod had to conclude the night. As we all know, lead singer/guitarist Tommaso Ricardi and lead guitarist/vox Christiano Trionfera left the band in 2017. Since that moment, drummer Francesco Paoli went back to becoming the frontman and guitarist of Fleshgod Apocalypse like he once was for their debut albums. Additionally, they announced an album in the works and of course, the theft they’ve experienced in Sweden. And to this one, I say to you, ciao bellos!

Tommaso Ricardi getting close and personal with his faithful legion.