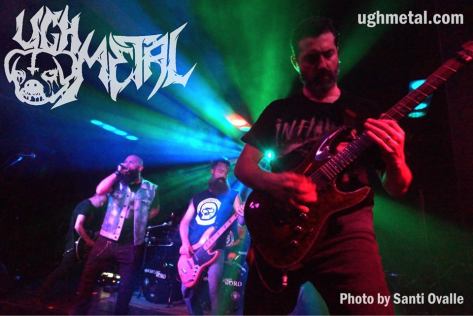 Local publication The Catalyst dove into the bottom of the barrel and scraped up the last surviving local metal bands on Sept. 30 at The Merrow. Which we are sure they struggled because according to many, San Diego does not have a metal scene…. HAHAHA! *catches breath* Got ya! I bet you thought this was another immature and uber bias article huh? Who do you think we are?! Closes minded metal elitists?! Ugh Metal is most things but NOT closed minded staunches! We love rock/metal and most of its little sub genres especially if it comes out of our own backyard. So chill out, put your battle vest back on because you won’t need to defend Lady Local Metal’s honor this time.

This gig was a great way to enjoy our Saturday night, send off September AND slither back into concerts! That’s right, the broke Ugh Metal hooligans may have chilled and played a great game of catch-up in the beginning of Autumn, but this was a great start. Why? Because you know Ugh Metal has a super soft spot and crippling fetish for local and independent bands who don’t need no (wo)man!

Jenny Oh: What better way to add some spice to our last day of September than a show featuring an all local line up? September was a normal month, but I don’t know about you Klown but my concert bug was giving me the withdrawal shakes. My decrepit body was a little relieved…and yet it missed the abuse. *Ponders*

Chuggo the Klown: The September to remember tour went in full force with a dose of defiance… especially to an authoritarian figure.

J: That’s it Klown? All you have to give is a basic statement? No pizzazz nor inappropriate innuendos? Are you okay Klown? Nevermind, now that I think about it, basic sounds right up your alley. But you know who is not basic? Defy The Tyrants!

Defy The Tyrants are here to win us over one song at a time!
(L to R: Vocalist Chris Maddox, bassist Alberto Lafarga, drummer Brandon Lobb, and guitarist Anthony Esparza)

C: Says the bitch who chugs anything pumpkin spice in autumn. But yes the boys from Defy The Tyrants first did a bit of teasing. How inappropriate of them because the Klown knows a thing or five about teasing. Wasn’t all too bad the Klown supposes. Anyway, when they played they gave everyone presents a dose of groove metal!

J: Umm you mean deathcore Klown! Especially when they took us to the brutal “Battlefront.” If Chris Maddox’s interchanging growls aren’t deathcore-esque I don’t know what is.

Chris Maddox of Defy The Tyrants has a voice that comes in several sounds! Each sold separately.

C: The Klown supposes you may be onto something but still thinks you’re full of crap. The Klown was a bit taken aback with their performance. Maddox is quite the showman but guitarist Anthony Esparza took the embodiment of the Joker that was on his hoodie that night. His show-stealing moment spoke to the Klown.

J: Soooo you mean he terrorized the crowd and threatened to give everyone a smile to match his? I don’t remember any of that but I do remember Esparza and Maddox spread the love around the stage and refused to stay in one place! Especially when the band decided to dish out their rendition of Slipknot’s “(sic).” Though Slipknot has not given me any tingles in years, it was a nice surprise to hear this fresh and rougher cover. No clean vocals man and the kid living inside me was happy.

C: Esparza cracked jokes and Maddox gave a good show as a frontman. The other guitarist Alex Ultrilla, aside from chatting it up with the Klown prior to the show, would chime in with his riffs and keep calm. How Zen…?  The real treat was when Maddox and the band didn’t know what to play and improvised by performing the Klown’s favorite song of all time. 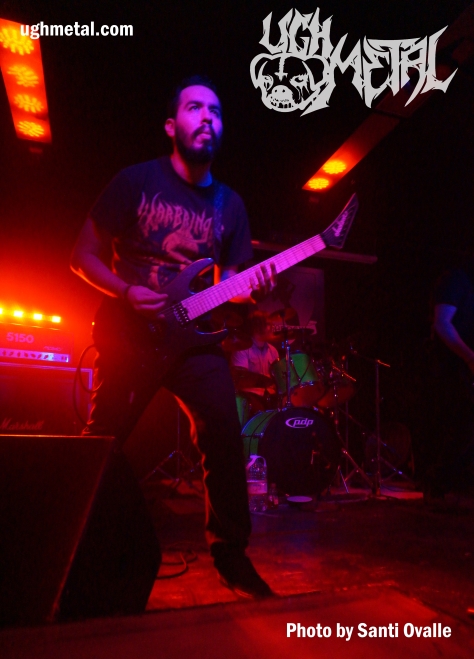 Alex Ultrilla of Defy The Tyrants knows we’re talkin’ about him.

J: Hmm I don’t recall Defy The Tyrants playing a metal version of Smash Mouth’s “All Star” but I do remember them playing their awesome cover of “Roots Bloody Roots.” Our eyes lit up as if it was Christmas morning. It was a treat especially for those that had never seen these guys before. You can check out the cover in their EP Wrest The Crown which is available on Spotify and you can get the EP here. Stay tuned we ain’t done talking about them!

C: On that note, let’s move on to the next band, sister with an L-shape hand on her forehead. Let’s talk about band from the summer.

J: Ooooh look at you belting out your fave song boi! But enough about you and more about The No Name Gang! We saw this quintet on July 7 and again this time around! These guys were different that Sept. night and were ready to play HARD ball. They were determined to make us remember their name, you are so out Eisenberg! TNNG are the new bad boys in town. 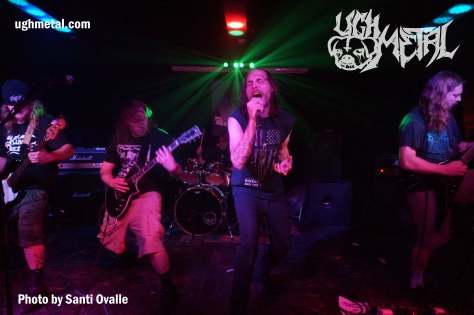 C: Yes, indeed. They belted a solid performance and even took it a bit further with new material.

J: That’s right they unleashed “iFear” and it made us feel the opposite of fear! Justin Hendrick’s expressions continued to fuel the intensity of this song. Hell, on this set! Hendrick outdid himself this time and had a passionate presence that could be felt MILES away.

C: Yup… I guess you could say that our survival skills inflamed especially after they played “Survival Enflame.” This incidentally happens to be the new song from these guys. Well… semi-new as it was disclosed by Hendrick right before its performance.

J: It wasn’t as fresh as “iFear” but they still delivered a crisp version of this song. The No Name Gang was dripping with energy and delivered a performance that left me speechless and felt like I was watching them for the first time again. Don’t you just love that feeling?! They were eager to please and they pleased us and then some! If you want more check out their EP No Man’s Land HERE!

C: Sounds very kinky, the Klown approves. Speaking of approval, the present crowd grew a tad more with First Impressions alumni, Nightshadow. We finally had the opportunity to see these beloved alumni since it couldn’t be done last time. Take that responsibilities and family!

J: You’re such a rebel Klown *rolls eyes.* This time around we grabbed responsibilities right in the pussy and it was also Saturday and we were ready to roll with some sweet ass power metal from these locals. Nightshadow tore a new one in the venue with “Ripper.”

C: The “Ripper” ripped open a new one and definitely had everyone who was familiar with them and casual fans surprised and enjoying this brand new gem. But it wasn’t just that that was premiering, Nightshadow took it a step further and premiered some more songs in between some of their mainstays.

J: They aimed to make their last performance of the year an unforgettable one and did so with “Blood Penance” and “Battle Cry.” Aside from this being Nightshadow’s last show of the year it was also their drummer Nick Mafi’s last show with them. Don’t cry! You can catch Mafi in Malison.

C: Lest the Klown forget the other new song “Strike Them Down” which is a song the Klown could use when playing his videya games or when he’s discussing why metal is better than most genre to common plebian. But their night didn’t end just there, they dedicated one to a mistress.

Nick Harrington and Danny Fang of Nightshadow having a little epic axe battle!

J: Yep that lucky lady had “Mistress of the Pit” sung to her. If you guys haven’t caught these guys live, you are in for a treat because it’s never a dull moment. Danny Fang and Nick Harrington’s respective solos will have you glued to those strings while bassist Chris Bader works his magic all over the stage. MAGIC like their self-titled EP which you can binge on here!

C: Brian Dell, the face of the band, was oozing with an infectious charisma that had The Merrow crowd eating off of the palm of his hand. But most importantly, that Rick and Morty shirt was dope

Brian Dell of Nightshadow was also upset about not getting his hands on that Szechuan McNugget sauce.

(that is what the kids are still saying, right?) it had Summer, Rick and Morty posing as Ghost. They may have lost a brother in drums that night, but the Klown knows that this group is going to be alright. In fact, keep an eye out for these guys they may just surprise you some more. If you have yet to see them, don’t wait too long because you never know what next year will bring and that’s my killing word! Now to move on to the next group! Who were they again?

The Killing Word are here to induce major nostalgia with their melodic metal.

C: Jenny Oh no one wants to know or try and figure out your age. But it is agreed, they were a time capsule to the past when guys like Bullet For My Valentine, All That Remains and Killswitch Engage were at the height of their popularity.

J: OH MAN!! The Killing Word hit the nail right on the head with their cover of KSE’s “The End Of Heartache.” It almost felt like I was hearing Howard Jones instead of Matt Frazier! Frazier’s vocals were so damn spot on. It was the first time in years since I’ve heard this song ya know!

C: Same. In fact, the Klown enjoyed Frazier’s work as a showman. He enticed the crowd to sing along to this new classic, right before the song was about to begin. The best part was that once that demand was announced the opening riffs drew us to an infectious synchronized headbanging and singing

Matt Frazier of The Killing Word gets us with classics and his expressions.

J: Another thing I enjoyed from this quintet was their passionate delivery of each song especially with “Stigmata.” Guitarists Maurice Marin and Matt Mortimer’s respective breakdowns and solos were to die for! Hell, the whole band was killer! *winks* They are a great gateway band for potential new metalheads, and will give seasoned heathens a nice dose of nostalgia.

C: Not to mention a perfect environment and sounds to help ease the ladies and dudes into our genre. Let’s face it guys and girls, not all are ready to dive head in and take in the awesomeness that is metal. The Klown noticed and couldn’t help but raise his glass to these gents. Their brand of melodic metal resonated passionately with the whole band. They even solidified their headlining status with a symbolism regarded as kingly and majestic.

The Killing Word had THE final say this night!

J: They raised us high above Pride Rock for the entire animal kingdom to see! They closed this showcase with the empowering “Like A Lion” and it left us feeling mighty. The Killing Word is here to stay especially with their harmonic mainstay and presence. If our metal scene is still considered nonexistent after this night filled with great quality local bands, then we clearly don’t know what a “booming” scene is. 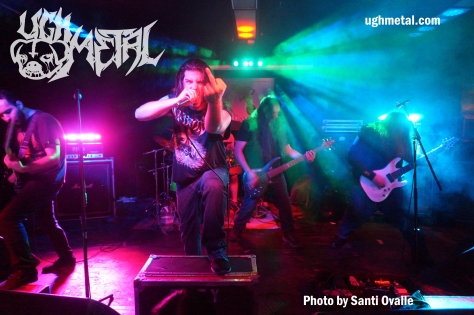 To the close minded haters that say San Diego doesn’t have a metal scene.
-Love Ugh Metal and Defy The Tyrants xoxo