Cinco de Drink-o, America’s third favorite drinking holiday is a time where most Americans pretend to be Mexican for a day regardless of what the first clown president thinks about Mexico. The Klown and the Ugh Metal team busted out their Mexican side and took our American asses to the Brick By Brick to kick off the Cinco de Mayo weekend with Soulfly and company.

First up was none other than the local quintet known as Godhammered. The moment front man Ray Garcia got on stage while wearing a green and red Rey Mysterio luchador mask with a beer in one hand and a mic on the other, the Klown knew three things at that moment. One, Garcia was prepared for the occasion and about to body slam us with a heavy dose of metal of the 6-1-9 variety, two: he could command with that presence and lastly, that it was going to be a great night.

The group kicked us off with some new material that night with “Declare War” and “Ravenous” which the Klown not only enjoyed but saw why these guys have a strong following. Garcia’s harsh vocals not only can interchange from screaming to growling but has energy of his own to keep a party going. Rey Mysterio’s masked cousin took it down a bit for some quick hydration before the band shared a moment with us by announcing that the songs performed were originally composed by their fallen comrade. By that point everyone, including those that were drunk, sober and on stage paid their brief respects to their fallen brother. Towards the end of the performance, Garcia unmasked himself and the group finished their set with “Beneath the Tyrant” and “Pandemic” from their 2013 EP The Illusion of Voice.

As the locals cleared the stage, Max Cavalera’s boys proceeded to take the stage. If you haven’t figured it out or you just dunno who the Klown is speaking about, he is talking about Lody Kong. This is the second time that Ugh Metal sees the Phoenician based band at the Brick with Soulfly.  For those who have never heard or seen the Cavalera boys in action, they are quite interesting in terms of what they classify themselves as. The boys claim themselves to be sludge metal but when you see them in action; they have more of a punk element about them when it comes to attitude, sound and appearance. However, unlike last year’s performance, Igor and Zyon Cavalera’s band was now one less member and had Igor Junior sporting bass duties. 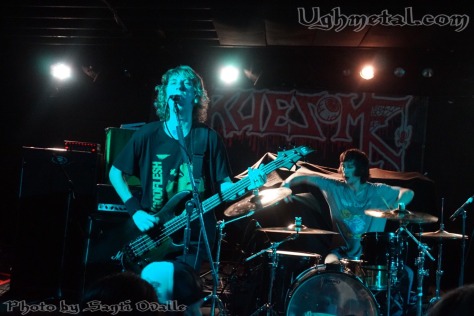 The second generation of Cavaleras take the stage with Lody Kong and take after their father and give the fiesta some attitude.
(Pictured Lody Kong vocalist/bassist Igor Cavalera and drummer Zyon Cavalera

Throughout the night, Igor oozed more confidence in terms of showmanship and as a bassist despite of having one less member. The trio treated us to some of their material from their first and current album, Dreams and Visions which was released last year. They performed some “Venomous Kool-Aid,” “Chillin’, Killin’” and “Pig In The Pen.” The band capped off their time on stage with the announcement of a new album sometime later in the year or the next, which for the Kong faithful was some joyous news.

As the young Cavaleras vacated the stage, the Klown was pretty stoked for the upcoming group, Gruesome for two primary reasons. The first being that although the Klown isn’t the biggest Death fan, he is still enjoys them and  lastly, it is the closest thing that a lot peeps, including the Klown himself, will ever get to a Death tour or hear vocals in real time that resemble the late great Chuck Schuldiner. The Cali/Floridian quartet treated us to “Trapped in Hell,” “Seven Doors” and “Forces of Death” from their Savage Land and Dimensions of Horror EP. The Klown and all in attendance were in a bit of awe as the front man/guitarist Matt Harvey not only commanded the stage but also how similar his harsh vocals and the music sounded to that of Death. Harvey himself would actually address what the Klown had already stated regarding how close a lot of us were to an actual Death show.

Matt Harvey of Gruesome has us feeling brootal with his Schuldiner-like vocals!

The quartet ended their set by paying homage to Schuldiner’s legacy by performing “Open Casket” from Death’s famous breakthrough album, Leprosy and had Soulfly’s bassist Mike Leon take over bass duties for Robin Mazen. Gruesome’s time on the stage not only brought about nostalgia and what-ifs to all but they also gave some exposure to the classic sound that Schuldiner helped establish to newer generations, and reintroduce it to those who were fortunate to see Death in its prime.

As Death 2-point-oh departed, the Cinco de Mayo pachanga continued with a touch of an Brazilian-American style of metal courtesy of Soulfly. The Klown was stoked to see Cavalera once more, not just because he was Max f’n Cavalera but because this last year alone, he has managed to surprise the tribe. This time Soulfly opened with one of the Klown’s personal favorites “Blood, Fire, War, Hate.” He then followed up with the anthem for every diehard metal head in the world, “We Sold Our Souls to Metal” from the latest album Archangel. When the majority of Soulfly took a break, Max allowed lead guitarist Marc Rizzo to bask in the spotlight by showing off his skills through a long, stand alone solo. 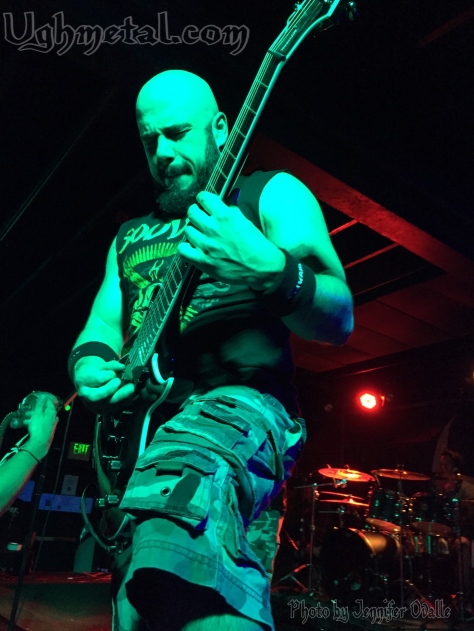 Marc Rizzo of Soulfly had his time to shine!

The surprises began to pop out when Max invited Asesino’s bassist/frontman Tony Campos to join him on stage to perform bass and backup vocals for “Plata o Plomo” just like the Enslaved album. Max revisited his lesser known side project Nailbomb by performing “Wasting Away.” Even though Max’s departure from Sepultura seemed like forever ago, it doesn’t stop him from treating us to some of the classics that he wrote and put on him on a living legend status. He first started by treating us to “Slave New World” and “Troops of Doom” much later. The night of guest musicians didn’t halt with Campos for one song, he alongside Gruesome’s Matt Harvey and Thrown Into Exile’s guitarist Mario Rubio, joined the stage to honor a legend by performing “Ace of Spades.” Not only did the crowd go nuts but it also brought down whatever was left from the Brick, figuratively.