Septicflesh gave us a hell of show on this sold out stop.
(L to R: Vocalist/bassist Spiros “Seth Siro Anton” Antoniou and guitarist Christos Antoniou)

Although it is not much of a confession, assuming you keep up with us, Septicflesh is an Ugh Metal favorite. Another favorite of ours is Swedish black metal greats, Dark Funeral. Both of these band’s albums received the Ugh Metal album of the year spots from the Klown’s sis and the Klown himself last year and the year prior, respectively. Septicflesh and Dark Funeral teamed up for a show of epic proportions at Ugh Metal’s stomping ground, the Brick by Brick who were granted the honor of hosting the two on February 23.

The first to take up the stage were the local boys in Sergulath. Sergulath should come to no surprise to you all, they’ve been featured once before here after all. Although the Klown and his moody sister missed out on what may have been the majority of their set, because of the line that the show garnered, the Klown was cold as hell but listened to what permeated through the walls and it sounded pretty good. When the Klown finally got inside, he had the pleasure of indulging on two and a half songs.

Brothers David (on the left) and Daniel Correa (on the right) of Sergulath conjured up an insane reception.

The Klown heard the sounds of the brothers Daniel Correa’s guitar and David Correa’s keys blending together to make a mix of folkish undertones and thrash.The band really had the party going and spectators were treated to an over enthused band but not as much as frontman/guitarist Daniel. Aside from being overly grateful by the reception and chosen to open, Correa continued to hype everyone and even made time to dedicate the final song, “Death Attack,” to a friend and birthday boy  of his named Matt. The night ended with an animated Correa thanking all of those who made it through the door to catch them on time, and announced their next show in the summer.

After the locals departed the stage, the local Vikings in Helsott took the stage and began to conquer the swelling masses. If you have been keeping up with Ugh Metal from the start, Helsott is one of the names that has been quite synonymous with the site. In fact, Ugh Metal has partaking in a few conquests with them. That night, Ugh Metal saw a new chapter in their saga and introduced two new faces and the return of a familiar one. The Klown is speaking of Sicocis’s riff masters Rafael Ortega and Ernie Rodrigues filling in from Sin City and the return of bassist Mikey Muller.

The band kicked off the night with the performance of the totle track from their EP “The Healer.” When the big man, Eric Dow, took his breather, he did what he does best, he hyped up everyone. Dow whole-hearted thanked everyone and then announced the departure of Dave Walston which would lead to Dow formally introducing the Sicocis shredders and reintroducing Muller. The band also took it back to their 2012 Folkvangr EP, announced that they would perform it in its entirety and began with “Folkvangr.” As things were picking up, the biggest let down was that the rest of their set was cut short.

The band expressed disappointment, as anyone would expect given an abrupt finish. The public, however, expressed more of a backlash and collectively shouted “let them play!” Helsott, as usual did a great job getting the blood flowing albeit an abrupt and shortened set. For those who have yet to see Helsott live and fancy themselves pagan metal fans, they are a must! Regarding Walston’s departure, the Klown wishes him the best and hopes that there isn’t a wedge between him and the band.

As Helsott cleared the stage, rising Colombian black metal band known as Thy Antichrist were ready to takeover and continued to have the crowd’s blood pumping. As the rest of the band kicked off the set with a guitar solo instrumental, the Klown even spotted his sibling’s emotional support goat, or so he thought. As the cloaked goat headed figure made its way to the stage, frontman Andrés “Thy Antichrist 666” Vargas revealed himself from under the cloak and detaching the goat’s head off of him as he settled himself center stage. Right from that moment, the Klown knew that he and the rest in attendance were in for a treat. Once that cloak was gone Vargas meant business.

If his otherworldly appearance didn’t speak enough volumes then his voice did so on a literal sense. Ever the present symbolism, Vargas wouldn’t just simply flash our beloved coat of arms, the horns but he would do so repeatedly while gripping the microphone, and when taking a bow. Vargas may have been the star attraction through theatrics and appearances, but the Klown would be remise to not talk about the rest of the band who did a fantastic job providing the soundtrack.

Lead guitarist of the trope, Robert “Abyssvs” Coronado was doing as much action as Vargas especially when Chris “Oricuss” Stropoli chimed with his powerful, speedy drumming for the performance of “The Great Beast.” The song also happened to come from their latest album Wrath of the Beast which was released that same day! The band dialed is back by a decade by performing “Destroying the Myth” from their 2008 Human Pandemonium split album with fellow Colombian black metal band, Infernal. The performance was great and if you haven’t seen Thy Antichrist live, the Klown definitely recommends that you should. If the performance didn’t get you in the pit then Vargas’s appearance and performance will and it will definitely leave a lasting impression.

Vargas and guitarist Robert “Abyssvs” Coronado made sure there was never a dull moment.

Although Thy Antichrist birthed the night’s black metal atmosphere, we began to prepare for a funeral after their set was finished. In this case, the funeral came in the form of black metal greats Dark Funeral. As the band settled themselves in the stage during the darkness, Janne “Jaloomah” Jaloma’s clashing cymbals opened and set the tone as the ever-authoritative Mikael “Lord Ahriman” Svanberg began the unmistakable opening riffs of “Unchain My Soul” which was accompanied by Andreas “Heljarmadr” Vingbäck spoken word’s monologue which transitioned to a screech right after. Even though Lord Ahriman experienced technical difficulties, he continued on and didn’t miss a chord like a boss.

The collective took it old school by revisiting 1996’s The Secret of the Black Arts Debut, 2001’s Diabolus Interium, and even revisited 1998 with the title track of their Vobiscum Satanas album. The night also saw Heljarmadr really interact with fans, showing the crowd that he’s not one bit shy. The pale faced front man crouched towards clamoring fans near the stage and sang in their faces like a dark serenade, and would reach his hands over for some literal hands-on interactions. Our Lord, with his mastery of the guitar and facial gestures followed along and had us all, including yours truly, enamored by his stage presence.

The same can be said about secondary guitarist Bo “Chaq Mol” Karlsson and bassist Fredrik Isaksson. As their set was coming to a close, the band briefly teased all. The Klown even thought it was over as they cleared the stage and the house lights came on briefly. After a much-needed breather, Dark Funeral came out with their encore set which began with the Easter classic “Nail Them to the Cross.” As the set officially closed, the band definitely made their presence known and delivered. The Klown had never seen them before and finally had the chance and can say with conviction that they were nowhere near disappointing. In fact, if you’ve never seen them yourself, they are definitely a band you don’t want to skip, whether or not you’re trve.

As Dark Funeral cleared the way, the stage was set for a symphony. Unlike most symphonies, the Greek greats in Septicflesh do it differently. Yes, the Klown is aware that they don’t exactly sound like Hans Zimmer or John Williams, smart ass reader but the premise is there. As true masters of the craft, the anticipation built greatly as the dramatic playback sample permeated the Brick. One by one, drummer Kerim “Krimh” Lechner, guitarist Christos Antoniou, and Sotiris Vayenas took the stage.

As they took their places, the man with the greatest hair to ever bestow the Brick, stood front and center and indulged us with his powerful vocals and bass strums. The Klown is of course talking about the mastermind Spiros “Seth Siro Anton” Antoniou. Maestro Antoniou opened this dark symphony with a song from the new album and took us back 2011’s The Great Mass. The band unleashed “The Vampire from Nazarene” in to the darkness that was literally created and later had us bow down to the “Pyramid God” during which the maestro demanded that the crowd show him destruction inside the Brick by Brick.

The night also took us back 5 years back to the Titan album with “Prototype.” The maestro’s concerto didn’t halt just there, as he would back track to some of their contemporary pieces as well as some other well-known classics. One such masterpiece was the Klown’s favorite, from their 2008 album with the same name, “Communion.” When the maestro began to introduce the great “Communion,” he commanded we all engage with the song’s chorus, every time it played. The maestro even participated in example to show us all how it gets done.

The night bolstered a powerful presence as well the powerful sounds that the band could offer. Although Septicflesh experienced technical difficulties, the band pulled through and proved why they’re at the top of the game. The Greek collective’s armada not only was a great one but also kept the sold-out crowd tamed thoroughly. The Klown had always wanted to see both Dark Funeral and Septicflesh they didn’t disappoint one bit. 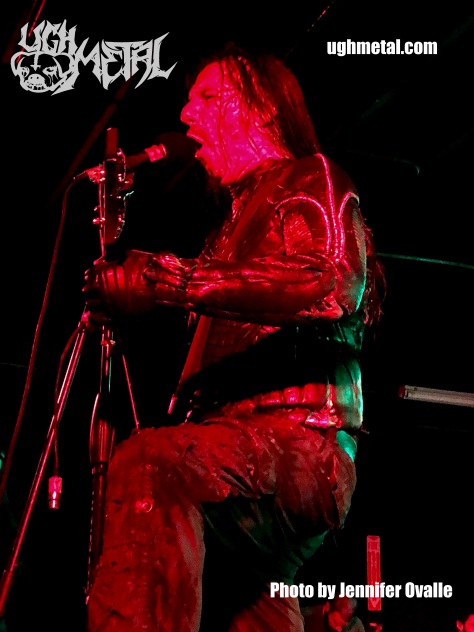 Spiros “Seth Siro Anton” tore our faces apart in this symphony of destruction.