Yo ho ho, me hearties! For this night, the carouser known as the Klown went from landlubber, to captain. The Klown commanded the SS Ugh Metal on its maiden voyage to the musical coffer known as Port Brick by Brick on October 23 with the intention of seeing five chanteys of the metal variety and get three sheets to the wind… or get squiffy, saavy? Of course you do! But for those who aren’t nautical enough, Captain Klown, became a pirate… of the non-butt variety.

Capt. Klown went to see five bands and wanted to be drunk… or buzzed, see no Urban Dictionary needed. Anyway… the Klown will tone it down the pirate lingo just a tad. No promises! It’s not every day that the buccaneers known as Alestorm gangplank in San Diego.

*clears throat* Avast ye, tar and wenches! The night greeted yer dear Cap’n with a chantey courtesy of local band Gravespell! This night also marks the third time yer dearest Captain has seen Gravespell in the last three months. As if the moment hadn’t been bountiful, Gravespell opened and rewarded the already sizable crowd with some booty in the form of a brand new song titled after their upcoming album, “Frost Crown.” 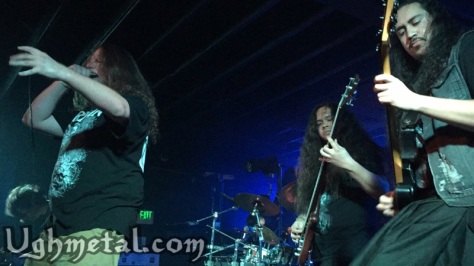 The song was awesome AF and reminded me of an All Shall Perish track, especially when lead guitarist Alonzo Larios shredded his solo. We were also treated to another new song titled “Imprisoned.” Before departing from the stage, the melodic black metal band heave hoed their conclusion with their current release “Ignis.”

As the locals departed, the Viking and pagan jack was raised up high when the man-o-war known as Helsott took the stage. This is also the third time yer dearest Cap’n has encountered these savages pillaging on Port Brick. The now quartet also kicked off their raid with new material and an announcement of a new EP, The Healer.

As Helsott sailed off, it was clear that the Vikings marooned us with bears. The bears yer Captain speaks of are better known as Aether Realm. This sleuth is from the far away land of Greenville, North Carolina and treated us with some pagan metal.

Aether Realm performed “Tarot” reminding us that when it comes to metal, “Odin Will Provide.” Although yer Cap’n still has no idea if bears shit in the woods, he does know that they can be magical. Their final act, “The Magician” was a great way to set the tone for an appropriate disappearing act.

Soon after the bears vacated, the goblins came out of the woodwork and took over the port. The Santa Barbaran horde known as Nekrogoblikon crept out showed us all how seriously metal they can be. They shivered our timbers and blew us down, when they summoned their rambunctious Goblin.

The goblins gave us a warning with “No One Survives!” But we did! That Goblin showed us what they are capable of and proved he was no landlubber by diving in to the sea of people and conquered it like a seadog. Blimey… did that Goblin know how to surf on that crowd!

Vocalist of Nekrogoblikon, Scorpion, is stunned with their mascot John Goblikon

Speaking of crowd surfing, the main bear from Aether Realm, Vincent Jones, returned to the stage and joined the goblins for “Bears.” Jones turned out to be nautical too, jumping into sea of people. Before these gremlins departed, they set the stage appropriately for the buckos by performing “Goblins Ahoy!”

As these imps heaved off the stage, the Jolly Roger in the form of a duck was held high and it was time to batten down the hatches for the upcoming storm, an Alestorm to be exact. Alestorm made it clear not to duck with them by starting with “Keelhaul” which didn’t matter because they had us “Walk The Plank” much later.

Vocalist and Captain of Alestorm, Christopher Bowes, shows off his keytar skills after successfully escaping the Gay Dolphin.

The buckos raged on and Christopher Bowes proved to all why he’s the captain of his ship by downing a bottle as he played his keytar. Addressing the last time the chantey put out an album, Captain Bowes and his ‘tar gave us a bounty in the form of a new song titled, “Mexico.”

Cap’n Bowes confessed to hornswaggling us by announcing the true purpose of their chantey, being that they came to “Drink” our booze. A while after Bowes came clean about his true motives; he introduced their guitar technician on acoustic and surprised with us the guest vocalist “Flo Rida” before announcing he had a “Hangover.” Just like any good hangover, the band concluded with their drink of choice, “Rum.”  With all that said, until next time me hardies! This be yer Cap’n signing off.