Nukem were on a mission to make their biggest explosion yet! Nuclear hellfire and all, we were not on a mission to find a fallout shelter because we wanted to absorb whatever they launched at us. Radiation and Geiger meter be damned! On June 3 the Brick By Brick housed an unforgettable night filled with balloons, thrash and cake? That’s right CAKE, not only to commemorate Nukem’s fifth anniversary as a band but to also celebrate and surprise one of their band member’s birthday milestone.

Chuggo the Klown:  That never stopped the Klown! ‘Cause then they be like “OH! Please get us beer! Please gets us weed! Watch out for my dog, he doesn’t know you!” Then usually I would say “Nah man, I’m cool.”

J: My god they sound so damn needy! And…

C: I know right!? That’s why the Klown charges to make appearances

J: Oh I was gonna say that you finally referred to yourself in third person, you freak! Perhaps you will finally stop embarrassing me, especially in front of all my new friends!

C: You mean in front of Malison? The guys don’t even know you!

J: Or you ‘cause you suck and you smell!

C: Well their newest member Sharky would beg to differ! 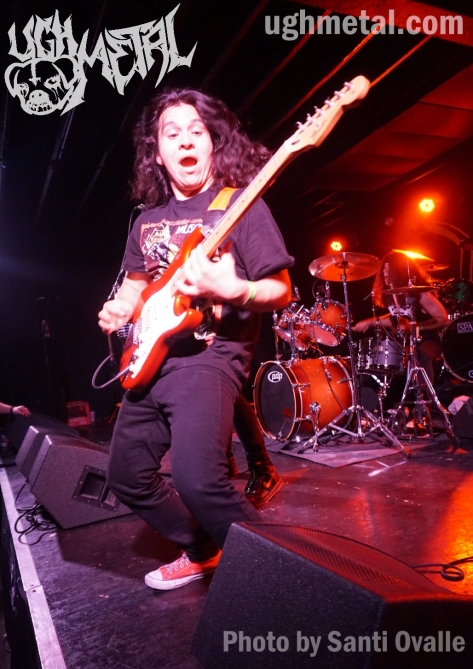 Malison’s newest edition, guitarist Sharky, will shred and chomp ya down while drummer Nick Mafi pounds you down!

J: He was just being polite!

C: No he just knows greatness when he sees it, that’s why he joined Malison!

J: I will only agree with the second part of your statement! I didn’t know what to expect from these guys but I gotta say, they blew me away. Their sound is a whole new different kind of thrashy breed with some power metal elements.

C: They brought some Bay Area thrash influences with a touch of SoCal groove. The Klown understands why Holy Grail handpicked them!

J: Malison not only brought a great set with great and catchy music but their members were so fun to watch especially your new friend and guitarist Sharky. It was a good time whether we were laughing at the jokes vocalist/bassist Steven Rondina would make or watching Sharky get down with his axe.

C: Speaking of friends and Sharky, my bestie, Temblad managed to surprise the Klown. They surprised the Klown not just because he got to see them again but because of one of their newest additions.

J: You mean you know the new guitarist Dave Calhoun and the bassist Kyle Netland? Damn Chuggo, you’re such a socialite!

C: The Klown was not expecting a high school reunion but there he was, their new guitarist/ex bassist Dave Calhoun. We obviously missed the first reunion but I guess not this time!

J: You’re doing first person again?! You must be sober! So you didn’t know the other new member? Nevermind I guess you’re not that cool. Anyway, it was so great to finally get our Temblad fix…it’s been too long! *Stares off into the distance*

C: I’ll say! The Klown finally got to hear “The Murderous Fifth” and “Mockery of the Fanatic” in real time! But the real treat was the Klown’s favorite song “Ship of Traitors.”

J: Temblad sounded fresh, vocalist/lead guitarist Lorenzo Kemp slayed his performance and was so happy to be there especially after sharing with fans their journey as a band and assembling their current lineup.

C: They made me tremble. Speaking of shivering me timbers, vocalist/lead guitarist Lucas Kanopa of Void Vator…that voice though! I know it’s meant for the ladies but damn!

J: Okay Klown, because you are now objectifying Mr.Kanopa…I shall now partake in this vulgar display of affection! His angel face matches that voice and rhythm, he is sure to lure demons towards the righteous path with his skills and looks.

C: Settle down, Pastor Jenny Oh! It was rock show not a sermon…but I agree! Because the “Time Has Come.”

Lucas Kanopa of Void Vator will lure demons into the light side of the moon.

J: For what? More objectification of this beautiful angel?! Ok! These LA rockers brought the spirit of the Sunset Strip to us minus the broken dreams and starving artists because we have plenty to spare here.

C: Sometime I hear the spirit of Vince Neil roams around the Sunset Strip crying about being barred from the Rainbow Bar & Grill because the powerful spirit of Lemmy doesn’t fuck around.

J: Yes, I shall contact Buzzfeed…again to investigate this, Rumor is you can know hear Vince’s spirit at the Brick but I don’t man. Now that we shed light on the ghost of Vince Neil, Void Vator did a great combo of old and new LA rock offering a new and invigorating take on this genre.

C: Major props to guitarist Erik Kluiber because he managed to make two trips to our humble abode in one month for the inaugural Metal Assault Vol.1 SAN DIEGO EDITION! *Jazz hands* Not only did he not miss a beat but his voice helped accompanied and amplified Kanopa’s angelic voice.

J: Keeping the spirit of of influential genres alive were the headliners Nukem. To make this celebration extra special, Jack Kwiatkowski, the co-host of the now defunct “Another State of Mind” segment (from the radio station San Diego’s 105.3), made the big reveal to the drummer Norm Leggio that the show was a surprise birthday party.

C: AND a commemoration of the band’s fifth anniversary. Jack also shared the fun stories Leggio and him had during their times hosting the awesome but lost show “Another State of Mind.” Enough memories! *Wipes away tears, smears makeup*

J: They assembled with badass/guitarist Laura Christine in tow! Christine along with vocalist/guitarist Steve Brogden slashed us with ear splitting thrash and riffs.

Guitarist Laura Christine and bassist Don Lauder of Nukem showed off their riffs.

J: Stop embarrassing me in front of her and the rest of Nukem!

C: “Evelyn’s Awakening,” WE FINALLY HEARD IT LIVE! Since we didn’t have a chance last time because the set had to be cut short L

J: Yeah but we always have The Unholy Trinity and a killer video to binge on this song and then some!

C: That’s true but it’s not the same, you’ll almost feel like “The Deceiver” when you recommend to people to listen to the album instead of the show.

J: No! I’m telling people if they had the misfortune of missing their show, check out their album to nurse the feels of missing the show.

C: The best part of this show was that bassist Don Lauder was in great health and spirits. We were unexpectedly invited to Leggio’s birthday and for once the cake was not a lie! What better way for him to embark on his other professional endeavors. If Leggio happens to be reading this, on behalf of Ugh Metal, break a leg and have a great tour!

The battle of the axes! Steve Vs. Laura…who will win?!

J: And thanks for the sick shirts! We wish you the best and many more birthday! Though we may be a tad late on these tardy wishes but Chuggo’s sex accident was to blame…again.

C: Hey! The guy wanted to verify my sex because he didn’t believe I’m all man!

J: Any excuse to pull down your pants huh?

C: I don’t need an excuse! On that note, close this out sister of mine. SAY SOMETHING WITTY!

J: OK! I’ll give it the ol’ college try! *Clears throat, does quick vocal exercises* No amount of darkness could dim Nukem that night and went out with a bang. ‘Tis gonna be a long year without a Nukem performance but I’m sure it’ll be worth the wait! We can’t wait to see what these individuals will offer to the metal scene when they come back in full force.