Team Klown may have gotten drunk with Punk at the Brick, but Team ASSasIN was in for the win! You know why? Because it was helmed by yours truly! I went ass in… to the House of Blues on July 21 to visit my favorite crazy Unkle Al Jourgensen. We packed our acid sticks and marijeeguana syringes and went on down to see our fave unkle and his little known band called Ministry. Unkle Al brought along his eccentric friends from Ho99o9 (Jenny-Oh Translate says its “Horror,” but spell them with numbers ’cause why not?).

Now that you’re done scratching your head after we deciphered the hieroglyphics, time to talk about Ho99o9! For those that have not been exposed to this dynamic duo, these guys will provide a new soundtrack to those fantasies you have about quitting that shitty job. The duo from New Jersey produce a great marriage of experimental, rap, and hardcore, creating a new relatable, anarchist baby…FUCK YASS! They have been causing audiences to lose their shit the right way since 2014.

TheOGM, drummer Brandon Pertzborn and Eaddy from Ho99o9 have most likely been losing their shit long before 2014 too.

Before yours truly goes on any further, there is something you need to know. A. I have been losing my shit in every way long before 2014 and B. I was exposed to the madness of Ho99o9 shortly after the show was announced, so I had no idea what to expect. The eagerness from fans surrounding moi was contagious as hell and remembering Ho99o9’s crazy shows that are readily available in the interwebs, there was no need to get more pumped!

After the distorted play track filled the dimly lit stage, the volume slowly lowered and lingered on the background as frontman #1 TheOGM slinked out amidst the roars. The vocalist stood slightly hunched in the far corner shrouded in a long black, skin tight gown…robe? His thick dreads limped on his face concealing it, fueling his enigma.

TheOGM had the stage all to himself as the new haunting sample blared on stage. Yes, yes I know I mentioned they are a duo. Who said co-vocalist Eaddy was gonna sit out of this special Comic Con festivity?! NO! Ho99o9 are a package deal and just ‘cause Eaddy was the last one to make it to the stage, he rolled in with a grand entrance…literally.

Eaddy was wheeled out on a dolly cart on the stage in a straight jacket, and eventually broke free from his restraints. Yes, we all collectively lost our shit with glee and we were ready to FUCK SHIT UP!! TheOGM sprung up, around and down, becoming a spazzed wonder while confining himself in his little corner. Eaddy, on the other hand, jumped and ran around claiming the stage while he bellowed into the mic. These two were an unstoppable force.

Eaddy is a madman with or without his straight jacket.

The duo dished out the pumped political anthem “War Is Hell” and made the pit become a lot more rogue with “Blood Waves,” and “Kill The Rats.”  TheOGM’s low and guttural battle cry pierced every ear in the venue, creating a strong ambience in to this musical psychological ride before busting out his rapid rhymes and chants. Eaddy’s cleaner vocals kept the momentum going, effortlessly matching his counterpart’s supersonic pace and movement.

When TheOGM announced it was time to wrap up their set, the venue whined as a whole.”I know, I know! But we gotta play by the rules.” TheOGM said as he tried to console everyone. Ho99o9 stirred all sorts of madness with their experimental rhythms, passionate lyrics and amazing showmanship. Ho99o9 was a twisted and frustrated nightmare we never wanted to wake up from. 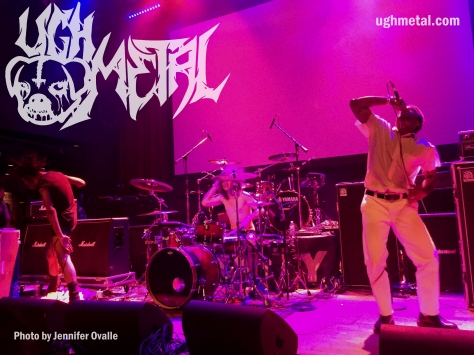 Ho99o9 is an unstoppable force!

Now that we came back to reality, it was time for our dear Unkle Al and Ministry! The OG fans migrated to the front and then in the darkness we all heard our Unkle Al voice shout “Comic Con!” He was the cool but loopy uncle that likes you enough to remember your face but not your name and addressed us all as “Comic Con” throughout the night. We didn’t care because we were so damn happy to see them!

‘Cause we don’t hug in this dysfunctional fam, Unkle Al and the rest of Ministry greeted us with a “Punch in the Face,” “Rio Grande Blood,” “Senor Peligro,” and the hell raising “Lies Lies Lies” which were all complimented by fun projections of hilarious political cartoons, bombs and everything in between. Unkle Al did minimal talking and showed a lot vigor and enthusiasm and gave the crowd what they wanted, more MINISTRY!

Unkle Al Jourgensen, bassist Jason Christopher and guitarist Cesar Soto waiting for us to succumb after “Just One Fix”

Ministry didn’t bust out the big guns yet but instead gave us the new song “Antifa,” which he first premiered in the Blackest of the Black Festival two months prior. Sin Quirin and Cesar Soto’s intro riffs caused our excitement to snowball until it exploded in to a fast paced frenzy. Unbeknownst to us, two women dawning red and black face paint and attire stood on the two ends of the pit and waved two giant flags with determination. The projections of war, chaos, and social turmoil flashing behind the band were appropriate for this song.

There was nothing blue about the House of Blues when the intro to “N.W.O” filled the venue and Jourgensen proclaimed “Here we are again! A New World Order!” This famous song created a volatile whirlpool of darkness, sweat and booze. Ministry added more combustion to the powder keg by busting out the classics “Just One Fix,” “Thieves,” “So What,” “Psalm 69” and “Filth Pig.” Yes, the pit was a merciless beast that no one could tame; the onlookers from the balcony were conflicted whether to look at Ministry or the pit.

Unkle Al showing off his skills on his guitar.

Though this bill only had two acts, it was quality over quantity. With Ho99o9, these two artists gave a voice to our darkest, most angsty thoughts and Ministry created an outlet for everyone to physically release those said emotions. The crazy reception took Unkle Al aback and left him speechless. He fumbled for the right words until he finally said “Damn Comic Con! I thought you guys were gonna be like…” he tried to search for the right words as he scanned the crowd. “Like… all awkward like tech nerds, and comics but you guys really know how to rock out!” Yes we do Unkle Al, yes we do. Here’s to hoping he visits us for another unforgettable family function.