Mictlantecuhtli resurrecting the spirits of both the dead and the living.

April 1 is the American pranking day known as April Fools. Of course, unlike the days when the Klown was growing up, the day of fooling has toned down and is more innocent by comparison like local radio station 91X posting on their Facebook about a Rage Against The Machine reunion tour in 2018. One thing that wasn’t a joke was the Southern Californian based black metal euphoria that was held at The Merrow. This black mass featured bands that were both local and North of the 5 freeway.

The night commenced with the local one man band that has made a previous appearance in Ugh Metal’s domain, Morphesia. Unlike the first time Ugh Metal lent their ears to this man, the artist known as Zombie Thirteen kept it… simple. How? Thirteen simply got on stage with no corpsepaint or the “usual” black metal regalia and performed. It was almost reminiscent to the time KISS ditched their outfits and signature facepaint or, for recent memories, Corey Taylor when he’s doing Stone Sour instead of Slipknot. In lieu of Satan, Thirteen treated to us some Egyptology by invoking the king and god, “Ramses.” It would be one of the few performances that had Thirteen’s black metal vocals. In an act of charity as well Thirteen’s new straightforward approach, he gave away merch such as CDs he’s released, stickers, buttons and his stage banners with the pentagram.

Zombie Thirteen of Morphesia trades in the corpse paint and black metal regalia for a fresh face and Ancient Egyptian gods.

After the royal introduction, Thirteen played “Osiris” which would be one of several instrumental songs. The Klown will admit that it was nice to hear the strictly instrumental songs because it felt like we had a glimpse in the mind of an artist when they are brainstorming or getting ready for a recording by jamming out. The night was closed with “Bast,” and though the night wasn’t filled with “traditional” black metal tunes, the night seemed rather intimate especially for a kick off. The Klown and Ugh Metal will stay tuned for what Morphesia will bring to the table next.

After the one man band cleared the stage, the quintet from Inland Empire,CA known as Sicarius took the stage and unleashed some black metal fury. The Klown is not exaggerating but if you haven’t seen these guys live, words alone cannot describe what a treat these guys were. The quintet opened the night with “Apocrypha” and followed with “Shadowalker” from their EP Scorch The Earth. When the Klown saw frontman Kurt Karcass, he believed that he may have summoned his inner Per “Dead” Ohlin (of Mayhem fame) for his performances.

Speaking of Mayhem, the quintet treated us to a cover of Mayhem’s “Funeral Fog” from the infamous De Mysteriis Dom Sathanas album, making this the second time this year the Klown has heard this song live. Karcass not only had a presence but also did something not too common with front men; he joined fans in the pit. Karcass paced within the crowd like a tiger stalking its prey, and circled around two dudes with punk band shirts and people lacking metal attire.

After the vocalist spared his prey, he hopped back on stage to unleash his strong screaming vocals which were strengthened by guitarists Merihim and Argyris’ growling backup vocals. Lastly, before the Klown moves on to the next set of performers, if you missed these guys or don’t take the Klown’s words seriously, you’re in luck! You’ll get a chance at redemption on the 26th of May when they join the legendary Taake at the Brick!

After Sicarius cleared the stage after a jaw dropping performance, the local blackened death metal band known as Greenskull kept the night going. The residential quartet took us to another worldly realm with their performance and manifestation. Greenskull commenced with an appetite for that otherworldly realm by satiating us and themselves with “Worldeater.” Front man/ lead guitarist Travis Whiting had a towering aura shining amidst the fog fit for a superior. Bassist/ backing vocalist James Jungman and rhythm guitarist Zachary Simsay also flashed their auras to fans as the fog rolled in and covered the stage. 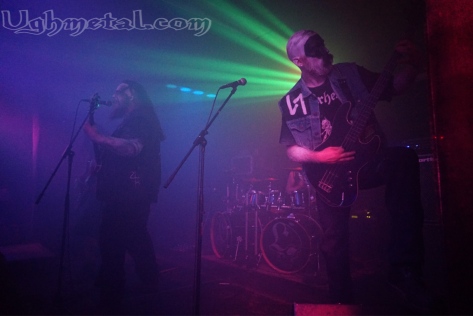 The group indulged us with “Ain Soph” and took it old school with “Primeval.” Greenskull would have felt rather negligent if they wouldn’t have performed the fan favorite “A Skull Shining in Darkness.” This song, which the Klown can say was blacker than death in terms of metal, featured Whiting’s mastery of the stage and talents. Not necessarily leaving Jungman completely behind, the Klown can say that he was energetic and gave a feel of a lieutenant ready to strike on command.

Local black metal trio called Necrochamber flung back the otherworldly aura that was left behind to a time when Norway began sprouting legends. Something worth noting is that Necrochamber has been around since 1998, the Klown was looking forward to see what the seasoned black metallers brought to the table. The group initiated their set with “A Ceremony for the Dead,” and immediately followed up their ritual with some black metal fit for an overlord in the form of “Lord of the Deceased.” Although the front man known as Nocturnal Overlord barely moved, the Klown shall note that what he lacked in motion was made up with his authoritarian charisma and music.

Necrochamber’s live sounds were nearly identical to Darkthrone and not just instrumentally. There was a time when the Klown thought that he was listening to the distinct vocals of Fenriz or Ted “Nocturno” Skjellum. The band kept the momentum going and treated us with “Necrochamber” and finished strongly with “The Fleshripper.” If you really fancy yourself kvlt, the Klown recommends that you keep your eyes peeled for these guys because they will indulge your black metal craving.

Although Necrochamber took us on a black metal ride to die for, the Los Angelino headliners went in for the kill. The five lords of the underworld known as Mictlantecuhtli (which is named after the Aztec manifestation of death) have been reigning the underground scene since 1998. As soon as the majority of the group took the stage, front man Cuauhtemoc would then manifest like a warrior’s spirit seeking retribution. Cuauhtemoc’s appearance seemed like that of a resurrected Aztec general that returned from Mictlan (the Aztec underworld) to prepare a rite fit for a jaguar warrior. 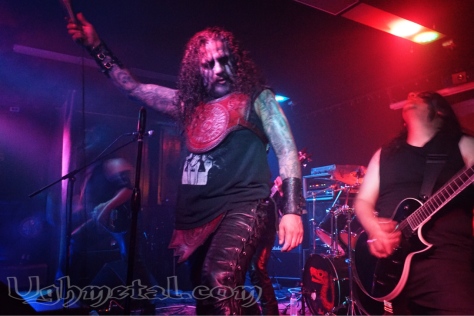 Cuauhtemoc of Mictlantecuhtli dons his armor.

Part of the ritualistic motif can be attributed to the clay chalice filled with smoke incense the  vocalist took out in the middle of the performance. Throughout the night, there was a blend of metal and folkloric style influences in their songs and were accompanied with Cuauhtemoc’s powerful screaming vocals. Going back to the Klown’s allegory, the group treated us to the black metal narrative “Night of Sorrow” from the Warrior of the Black Sun album.

Staying true to the Aztec roots, the group invoked the god of the sun, Tonatiuh, with “Heart of the Sun” from their debut album, Pillars of Silence and brought a bit of sunshine to the night. Mictlantecuhtli continued to celebrate the Aztec warrior culture by playing “One Last Battle” and as the group left, everyone in attendance fevered like the plebes after witnessing a sacrifice for the gods. 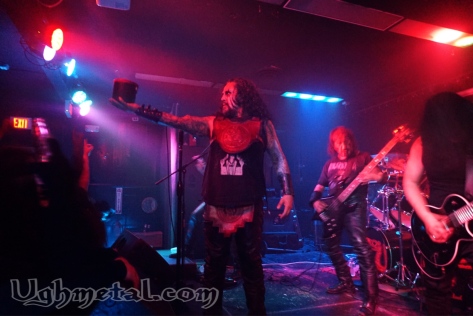 Behold the clay chalice of the underworld!

The collective returned to soothe the masses with their encore performance of “Broken Shields.” The Klown and everyone who was at the show were spoiled rotten and overindulged and the Klown really hopes to see these gents again in our humble abode.