It was a hot night in July 8, and the Ugh Metal team had the fortune of returning to The Merrow for the second night in a row! The night before we went to the sweet show Metal Assault and Dark Gem Entertainment put together, if you missed out no prob! Read all about it here. If you did not catch our Firey Sides Chat with Lord Dying, feel free to catch up afterwards or during, who are we to judge? We didn’t remise the invitation Lord Dying guitarist Chris Evan and Bret August of Black Arrow Entertainment extended to us. It was truly an offer we could not refuse especially because it was Lord Dying’s limited engagement.

Jenny Oh: We be special! Lord Dying chose to come to our shitty town! *Weeps*

Chuggo: Emphasis on shitty. *Winks* Either way the Klown was looking forward for some booze and Bastard Saints!

J: The members from father’s cult? Why do you care so much about them? They don’t even share their Coronas with us. Bastards!

C: The Klown meant The Bastard Saints. And that’s okay, they can keep their shitty Corona lights! The Klown wants REAL beer. Such as the stuff they serve at The Merrow.

J: So I guess you’re not a beer slut after all, huh? But The Merrow sure serves delicious booze especially when you’re enjoying a nice gig from The Bastard Saints.

C: Enough of the gratuitous advertisement of The Merrow’s big ass beer selection! Not that there was much advertisement to begin with. ON TO THE BASTARD SAINTS! They had the ability to bring the old school back to the new school.

J: Fernando Ramirez made us see colors and clouds every time he nailed them high notes! You go, boy! They even played a cool song we will be using for our revenge montage called “Wrath.”

C: Yeah! Death to O’Douls! The Klown shall wear his “Evil Crown,” no longer will he be the jester but the Klown King…

J:  Whoa there! Hold on there you angry little man…

C: Wrong concert dumbass! “Evil Crown” touched basis on the Teutonic thrash movement most famously pioneered by Kreator and Tankard. It was a good substitute if you didn’t have the chance to catch Kreator on the Decibel tour earlier this year. 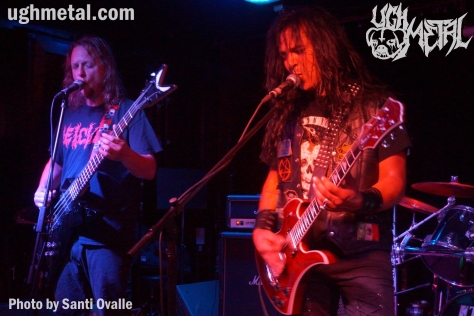 Bassist Nick Trzos and vocalist/guitarist Fernando Ramirez of The Bastard Saints serenade the beer selection at The Merrow.

J: The Bastard Saints ended their set “Ripping the Stitch” which was just as ruthless as the title. This song had a foreboding sense of doom with great riffs from Ramirez and lead guitarist Jason Trzos. Snitches beware!

J: With Raise The Guns! The trio became a quartet for the night by having their buddy, guitarist Chris Kim, join them for this performance.  Some fun facts about these guys is that Dylan Marks drums for this band aside from Beekeeper and Eukaryst, and the frontman/guitarist is Bret August. What can’t these guys do?

C: The Klown has asked himself the same question but has yet to get an answer. Enough unanswered questions, it’s time to talk about the Guns! They shot off with their own brand of Thrash.

J: Raise The Guns shot up the place…with extreme adrenaline! Especially when they shined the light, the “Light Of Malice.” August’s presence commanded the stage and you knew he meant business and Chris’s enthusiasm was contagious. Who wouldn’t be after they get to play with a cool band?

C: I don’t know some plebeian? Pardon the first person, I’m pretty sober at the moment. Enough about the Klown, the song that stuck out to him was the song that should be made into a law, “Silence By Law.” The opening riff alone is enough to hook anybody!

Bret August of Raise The Guns is your neighborhood badass.

J: Indeed Klown their set was not long enough! But quality over quantity, if you guys ever have a chance you must catch Raise The Guns, it will be a decision you will not regret. Now because it was Sinday eve, we had to receive our Eukaryst.

C: We were treated to our local sacrament, at long last. Worth nothing since the sister already took Dylan Marks away from me as a fun fact, the Klown has one of his own. This is the band that has Belisario Dimuzio as a full time guitarist when Cattle Decapitation isn’t borrowing him.

J: Oh yeah! Well here’s another fun fact Klown, SCREW YOU! Also Dylan Marks was on double duty that night and drummed his heart out for Eukaryst too.

C:  They indoctrinated us into their “Lost Tribe” of Prog Death Metal.

J: They added more emphasis on the death metal with “Eucharist.” This unholy beast comes right at you a la Facehugger and is sure to start a pit.

C: The only thing the Klown is thankful for is that there was no actual “Anthropophagy” happening at the time of the performance. He was beginning to think there was going to be some giving the state of some of their possessed congregates.

J: Not even Ben Marotta could resist the power of the Eukaryst and when he wasn’t growling like the creature from the black saloon, he was rolling on the floor succumbing to this possession.

C: I still wish they woulda showed the Klown where the actual “Witch  House” was. The Klown needs a booty call.

Ben Marotta of Eukaryst stars in the “Creature of The Black Saloon,” an Ugh Metal Production of course ;P

J: You’re too much of a bitch for her, but enough about you Klown. It was nice to finally see these locals in action especially after hearing so much about them.

C: Indeed*cough*bitch*cough* we were dying a bit from the musty air but the angels of doom,  Lord Dying, revitalized us.

J: They started off with their hit “A Wound Outside of Time” which has a starting riff that will give you all the right chills in all the right places. Though to be fair this whole song is teaming with amazing and definitive riffs.

C: Lest the Klown forget the pit it immediately started. He was a little flabbergasted because he is not used to seeing that in a doom/sludge show that often. With that pit it felt like “[All Hopes of a New Day] …Extinguished.” 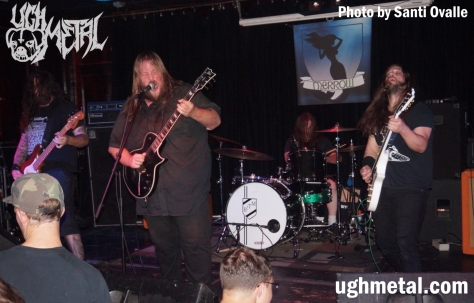 J: Lord Dying resurrected some of their older stuff and briefly triggered a tiny existential crisis with “What Is Not…Is” which totally was where it’s at and it is what it is.

C: Settle down, Jenn-den Smith! Not even today’s top philosopher’s can decipher both of you! Here’s a bit from Klown-fucious, when you think there is light “Darkness Remains.”

J: With your shitty “philosophizing,” enlightenment is just a myth. But this song, however, is the shit especially when Chris Evans and Erik Olson lay down more super sweet guitar solos. Olson’s screaming vocals are sure to give any metalhead enlightenment.

BFFS/ Founders of Lord Dying, Erik Olson and Chris Evans, jamming side by side.

C: Olson’s vocals were harsh, but not too harsh. In fact, they were rather soothing despite of the harshness he incorporates. The rest of the band’s rhythm and melody suited the vocals like the perfect blend from your shitty Starbucks drink, right Jenny Oh?

J: As a newly enlightened person, I will ignore the low blow of bringing Starbucks in to our personal disputes but I will agree with the rest of your statement. I’m sure the rest of the gleeful and/or inebriated moshers would too. The pit was very much alive and well for the entirety of Lord Dying’s set. This special show worked all sorts of magic on the crowd.

C: The Klown concurs although he is weary as to why they sang about the Klown’s ex-girlfriend.

J: The snooty lady clown from Railing Bros.? She didn’t even know you existed. And I don’t think Lord Dying had the misfortune of seeing that three-ring shit show.

C: They may have and that bitch always likes to spread lies about not being with the Klown. She was always expecting the Klown to be “Suckling At The Teat Of A She-Beast.”

J: I doubt they garnered inspiration for this brutal song from your failed endeavors. It was a great song to close their night and yes the pit grew into a mighty whirlpool where fans were having their last hoorah. It was an honor to serve in the court of Lord Dying. 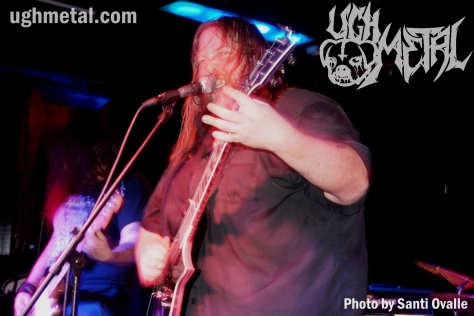 Erik Olson of Lord Dying’s voice is not of this world!