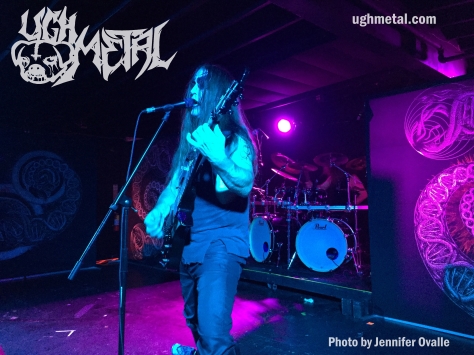 Inquisition sanctified us with their legendary black metal.

Inquisition reached our shores and marched straight to the Brick By Brick on Sept.2. Not a single dog fearing person was in sight ‘cause we’re San Diego and we love our doggies, but instead the black metal icons found a dog loving horde eager to hear their dark hymns. But before Inquisition ascended to their rightful place, they let their black metal armada take the reins.

Jenny Oh: This Inquisition didn’t bring death and destruction, just booze and a good time! We were sweating like sinners in church…but because it was a hot ass and super humid Saturday night. Mexicali death metallers Tombstoners brought some more heat while stepping in at the last minute.

Chuggo the Klown: You? Church? JOh-kah, please! Speaking of heat, Tombstoners performance can be best described as a flint being struck to spark a flame. Although the Klown is not sure if Impure Consecration was suppose to perform that night or not, the Mexicali duo did a good job filling in! 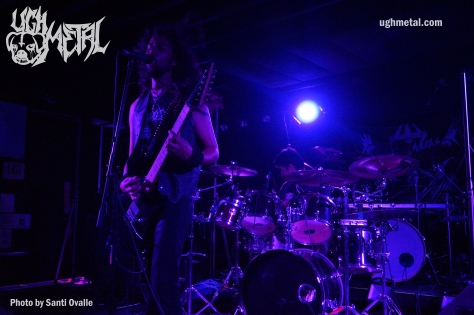 Tombstoners brought some more heat with their brand of black metal.

J: Hell yeah they did! Tombstoners showed us the brutality Baja Cali has to offer. Though this duo is, well, a duo they definitely played with the energy of an octet. Quality over quantity! Vocalist Alex Venegas’s elusive presence was only heightened by his thick growls and his flickering medusa locks. Thank goodness they had a handy dandy fan onstage, did I mention that day was hotter and a lot more humid than Satan’s asshole?

C: Uh… yeah. The dynamic duo performed admirably and really began to set the tone for all the things to come. Their brand of metal and presentation was rather mystifying and ambient in the Brick. You guys should totally check out their bandcamp here and see what we’re talking about!

J: Speaking of ambient, deep from within the smoggy urban highlands of LA rose Highland! These guys presented their brand of traditional black metal that was proudly made in SoCal ‘cause ‘MERICUH!  Kudos to frontman Gevork Matevosyan for not only beating Reagan from The Exorcist in the extreme eye rolling competition but for also being brave and/or cray enough to be completely covered. Did I mention it was a hot ass and ultra humid day that day?! #neverforget 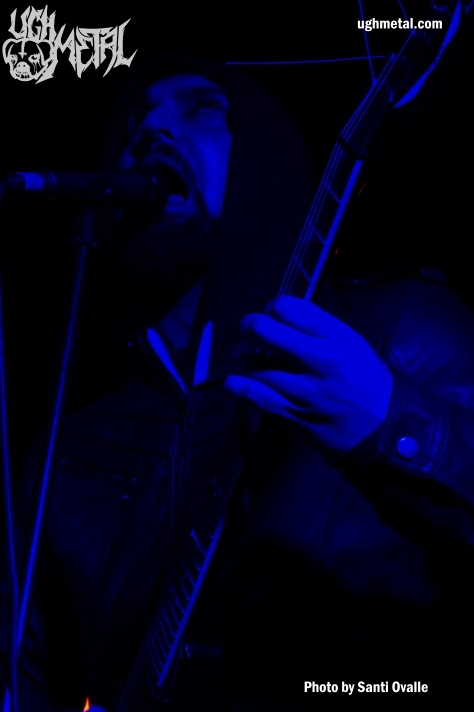 C: The Klown knew he was basting in his juices but not as much as those guys. The drummer Michael Semerdijan wasn’t covered but definitely met your exaggerated claim. But the moment the Klown saw Matevosyan’s possessed-crazy eyes, he knew that everyone present was really going to experience some kind of awesomeness.

J: Exaggerated?! That heat was nothing to you Klown since you are a sad and inebriated demon from hell but for us mortals, it was unbearable! Though Semerdijian was melting, he didn’t let the overheated environment deter his speed and focus. When one wasn’t silently comforting Semerdijian, we were hypnotoad’d by Matevosyan’s facial expressions and the whites from his eyes. The vocalist certainly didn’t let his juices affect his presence and showmanship.

C: Indeed, the band didn’t need to conceal themselves behind any extra special effects or props. Highland not only put themselves out there but they kept the spirit of black metal and “occultism” alive. Even though Matevosyan remained stationary and left everyone in a trance, guitarist Narek Avetisian also showed off with his riffs and motions on stage. 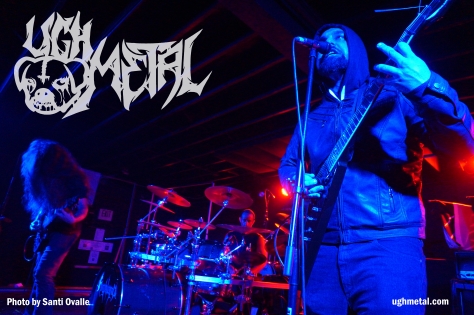 Highland collectively flipped off our humidity and heat! Did Jenny Oh mention it was hot AF that day?!

J: We understood why Highland is one of the fastest rising black metal acts in SoCal. Seeing these guys is a must, especially Matevosyan and his expressive face. Hearing these guys will appease the black metal demons and the trve in you. Listen to their album here!

C: After a mystical trip from the terrains by Mount Ararat, we took a trip to Guatemala and went back in time to honor the Mesoamerican Mayan roots with Volahn. No ritualistic sacrifices required… this time anyway.

J: But headbanging was! Vocalist Eduardo Ramirez was as elusive as the Mayans civilization. Though Ramirez wasn’t out there, his presence was more than enough to intrigue anyone. 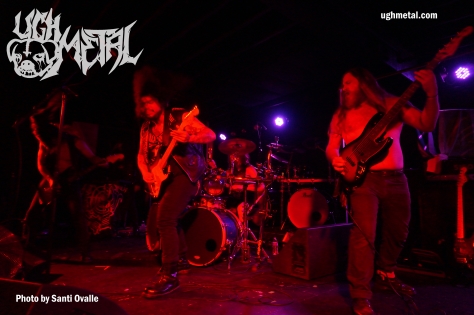 Volahn would please the Mayan gods!

C: The Klown supposes you might be onto something. Volahn, in the way of a Mayan ceremonial rite, added more mysticism to their already numinous tone and setting. They also threw Spanish in to the mix for some added measure.

J: Raza! Volahn brought a new and refreshing concept. They showed any nay-sayers some brutality… like the Mayans! They were cool. Much like the hype of the Mayan calendar, Volahn’s reign ended. They left us in a state of astonishment.

C: The Klown is astonished with your lack of tribal knowledge. But onto a much talked about band known to the plebeians as the “Mgla knockoff” even though he has yet to see what was truly imitated. 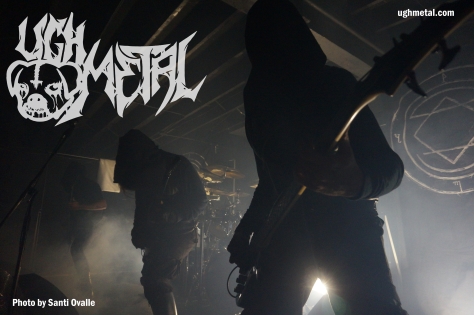 Uada crept out of the Oregon woods and into our hell hole of a city.

J: Trick statement, Klown. The plebes don’t even know who Mgla is! Uada are different than Mgla and both of these bands have a style of their own and are great. Of course they may sound similar to the untrained ear and to the sheep. I love these two bands and it be pretty bitchin’ if they toured the states together and come here to our humble beach city! *Daydreams*

C: Add Midnight in to the mix and we got ourselves a hooded black metal X-mas! But enough of our wishlist, we are here to talk about Uada and their hooded glory shrouded in darkness.

J: I was very excited to see Uada and they did not disappoint. This American quartet came out of the Oregon woods and into the Brick By Brick like hooded specters. 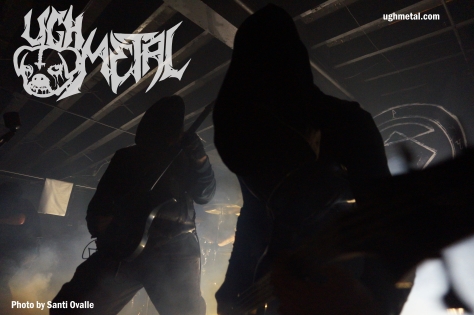 C: Move over Aokigahara Forest! The Oregon forestry just beat you in spewing out dark apparitions, with the difference being that they don’t creep the Klown out or entice him to kill himself. These dark figures from the Northwest proved that less can be a shit ton more!

J: The relatively dimly lit stage pleased the pit, the drunkards and the fans especially once hooded guitar player #1 (James Sloan) started playing the opening riffs to “Devoid Of Light” and Jake Superchi let out his harsh screaming vocals.

C: Right, you are sis. The Klown will point out that, in an ironic twist, they had plenty of lighting in the background and had our undivided attention towards them. The Klown has only one thing to say about that: Genius!

J: Lights or no lights, Uada didn’t need to try hard to get everyone’s attention. Every time Superchi got a little closer to fans, they clawed the foggy, warm and musty Brick by Brick air to get closer. Superchi towered over spectators and silently praised with enthusiasm by flashing his horns. 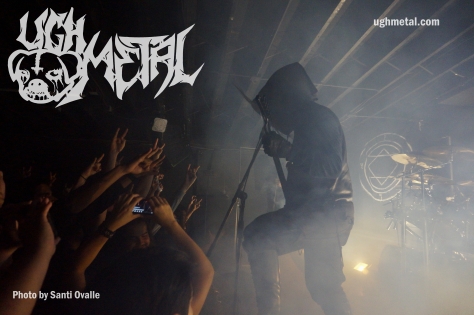 All hails Superchi and Uada!

C: Lest the Klown forget the ominous sounds of the closing song “Black Autumn, White Spring.” Some people, totally, came out looking possessed but not as much as Trevor Matthews’ double kick. Those bass drums sounded like a rapid heartbeat which the Klown is sure was what the moshers had going for them.

J: Less was more with Uada. What an unforgettable performance. After they retreated back into the darkness, it was time to cleanse and feed our need…

C:  Question! Are we going to talk about Inquisition, yet?

J:  *Slaps red nose off of the Klown* That was my moment! Thanks for stealing my moment, Klown! But yes. 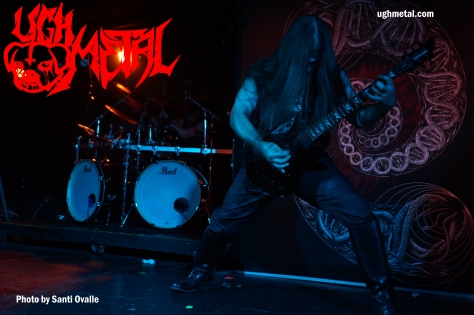 C: You took too long in bringing them up, Muy-quemada!

J: I am an artiste! One cannot simply rush and artiste! Anyway you uncultured swine, though I was a little sad they did not take us on the “Wings of Anu” this time around, they began their reign of savagery appropriately with “From Chaos They Came.” The pit, she was alive and pleased.

C: The pit, she was to die for! *Perv face activated while evilly laughing* It was just like with Randy “Macho Man” Savage, they were kings and just like any king, they took “Command of the Dark Crown.”

J: The only thing Macho Man took command of was that nasty coke habit among other things but this ain’t about him.

C: Yes, they better be glad Hulk Hogan wasn’t there, otherwise we would have been “Embraced By the Unholy Powers of Death and Destruction.” 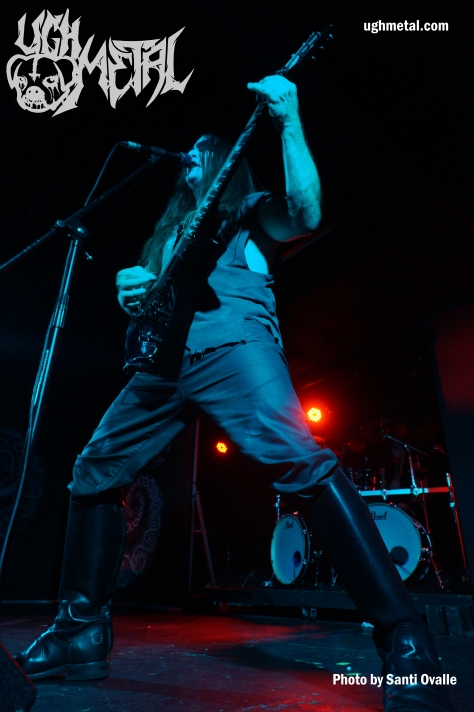 J: What, are we dabbling into our current political climate now?

C: Just a bit. I had to give a shout out to a fellow clown. One of us has to take the “Astral Path of Supreme Majesties,” the Klown is really talking about Pennywise. The Klown must beat Donny! I am Pennywise’s sole servant! Praise IT!

J: Okay well you’ve clearly had too many expired Paletas Payaso and seen too much of It. Enough about your sad life and more on the boys from Cali! Drummer Incubus’s stamina would put a seasoned triathlon to shame! 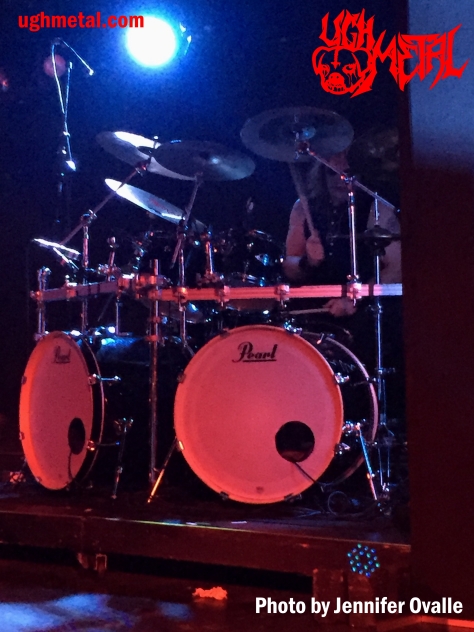 Incubus of Inquisition put to shame any seasoned triathlon .

C: El Pallaso would like to state that although, for “metal standards,” they do less it goes back to the argument less is far more. No fancy gimmicks, no fire balls, no sacrificial offerings, none of that. Dagon and Incubus’s presence and talents are the main focal point and attraction.

J: Whoa Klown, didn’t think you’d spew out your alter ego to the Mexican authorities like that! Didn’t know you had it in you! I gotta mention Dagon’s hair, not just because it’s beautiful but also because it escalated his subtle but grandiose presence. Dagon’s guitar plucking and Incubus’s rapid drum pounding was a spectacle. We were all lucky to be at Brick to witness these guys, but we were lucky to see them for the second time this year.