The one and only, Death Angel.
(L to R: Vocalist Mark Osegueda, guitarist Ted Aguilar and bassist Damien Sisson)

I know it’s late but, damn it I will say it anyway! Happy Halloween! And for those of Hispanic descent, Feliz Dia de los Muertos! The Klown shall take you back to October 30 where the night greeted us with Bay Area thrash legends, Death Angel.

It may have been the night before Halloween but the treats poured in with some thrash metal, also candy from a nice witch inside the Brick…and booze. Ugh Metal got their first Halloween started right, thanks to Brick by Brick. Without further ado, allow the Klown to treat you to this monster mash.

The night of thrash and treat kicked off with our local metal quartet, Monarch. These boys don’t mess around! They began with “Memories of War” and then after with “Dawn To Night.” Hearing these guys rock out, reminded the Klown of an early up and coming Exodus dashed with some new. 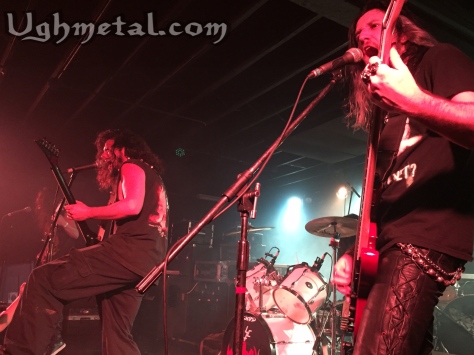 These North County kings also gave us a treat to new songs titled “Reaper” and “Slaughter” from their brand spanking new demo. Vocalist/rhythm guitarist Matt Smith, and lead guitarist, Casey Trask, may not be a Steve Souza and a Gary Holt but they have a way to show the peeps that they are a real deal. Monarch may have had a short performance but they made that time count.

After Monarch, the fast rising quintet from North of interstate 5 took the stage. If you haven’t caught on, the Klown is speaking of Thrown Into Exile. This is the second time Ugh Metal has witnessed these guys perform and the Klown for sure can’t forget their performance on Cinco de Drink-o! These boys released a debut album titled Safe Inside on October 21 and had been touring since.

T.I.E’s energy and excitement could be felt twofold that night. What band wouldn’t be after a strong debut album and a great crowd reception? After the band’s playback intro finished, guitarists Raymond Sanchez and Mario Rubio slayed the opening riffs for “Start Making Sense” with Henry Derek’s vocals blasting into the mic. 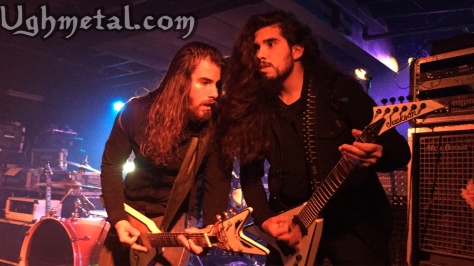 There’s no stopping these two shred masters from the L.A. band Thrown Into Exile
(L to R: Guitarists Raymond Sanchez and Mario Rubio)

Afterwards, T.I.E immediately played their current single “No Words.” The group capped off with “Delination.” The guitarists and, bassist, Dave Corsile played it out like it was their final show, ever. It was a great way to leave those in the Brick clamoring for some more.

After T.I.E’s performance, we experienced some fallout courtesy of El Cajon’s thrash royalty, Nukem. The band kicked off with “DOI” and then proceeded with “Nukem All.” Hearing Nukem made the Klown reminisce about Municipal Waste, if they were heavy on thrash.

The Klown was incredibly impressed with guitarist, Laura Christine. No, not because she’s a chick, but because she was a kick ass chick who’s clearly a master of her craft. It was mesmerizing seeing Christine and vocalist/lead guitarist of Nukem, Steve Brogden exchange riffs. In the spirit of Halloween, Nukem treated us to their very first song “WarWolf” and “BloodSeekers.”

My hat’s off to bassist Don Lauder because five days prior to the show, he underwent an emergency surgery and was slapping that bass like a champ. It was a shame their time was short, otherwise we all would have been treated to “Evelyn’s Awakening.” But then again, time flies when we are havin’ fun, am I right?

As the fallout cleared the stage, death became imminent. I’m talking about Death Angel… duh. These legendary gents got shit started with “The Ultra-violence” and transitioned immediately with “Evil Priest.” Front man Mark Osegueda and lead guitarist Rob Cavestany effortlessly stirred The Brick, especially after they started playing “Mistress of Pain,” another favorite from The Ultra-violence.

Osegueda hyped the crowd and shared how the band had already played 12 shows in a row! The vocalist also expressed his undying love for music and their loyal fan base. He also opened up about the great experience they had while supporting Slayer and Anthrax on their North American tour three days prior.

Osegueda said that even though they were aware most fans attending the prolific tour were not there to see Death Angel, they still gave it their all. BUT before anyone would misconstrue his statement, he expressed nothing but love and gratitude to the bands.

Osegueda announced that our treat would be an additional song not originally in the set list, “3rd Floor” from Frolic Through The Park. Without forgetting about The Evil Divide, the Bay Area thrash legends played “Father of Lies,” “Lost” and closed out the show with “The Moth.”