Editor’s Note: Y’all actually thought that Team Klown was down and out for last week? Ha! The Klown had not yet begun to fight! Representing Team Klown is none other than the Klown himself. Please hold your applause till after this review. The Klown felt like these albums should have been featured by the “J-Oh-ster” but she apparently said “Nah.” So now the Klown shall crack open these cold ones before they fizz away!

Sorry “uber-metalhead” but the Klown has NF2G on what your thoughts are on the Comeback Kid. Seriously, no fucks especially you, sister dearest. If Nuclear Blast Records thought they were worthy of being snagged so be it. This import from the mystical lands of the Canadás has managed to bring back their brand of hardcore with Outsider. The band starts off with “Outsider” which has sounds of hardcore punk and features the sounds of lead guitarist Jeremy Hiebert, bassist Ron Friesen which are immediately joined by Andrew Neufeld’s harsh vocals and riffs for the extra bit that it needed.

This contemporary also features fellow Canadian and musical genius Devin Townsend as a guest vocalist for their latest single “Absolute” which really added some extra oomph to an already good song. “Hell of a Scene” and “Somewhere, Somehow” take you on a melodic hardcore trip that’s radio friendly. Speaking of radio-friendly, “Consumed the Vision” was rather soft on the ears but it had more of a punk influence and also featured Scorpio’s Chris Cresswell lend his vocals to the track. The band really highlights Hardcore Punk with “I’ll Be That,” “Outrage (Fresh Face, Stale Cause)” and “Throw That Stone.”

The Kid takes the path of Punk in terms of speed with “Blindspot” and “Livid, I’m Prime.” The band finishes this album rather melancholically at the start with guest vocalist Matthew Goud of Northcote and his signature brooding like indie style music combined with CBK’s hardcore punk sounds. With all that said CBK lived up to their name and made the original comeback kid (and inspiration for their name) NHL Hall of Famer Mario Lemieux proud. You can get a copy of this comeback right here and see what the Klown is talking about.

6 out of 6 Comeback from Outta Nowhere

Living Colour… let’s face it guys, when you think of them you think of one song. “Cult of Personality” shall always be relative to this band, gamers will remember because of GTA: San Andreas’ Radio X and combat sports enthusiast because of ex-WWE/UFC competitor CM Punk. The band that Mick Jagger invested on has comeback with a brand new installment titled Shade which was released through Megaforce Records. The album kicks off with “Freedom of Expression (F.O.X)” which can be best described as vintage Living Colour doing Hard Rock.

It is then followed by “Preachin’ Blues” which, if you haven’t caught on, contains some Blues and makes a really awesome Blues-Rock track and features some guitar play and solo from Vernon Reid. They would do that again with “Invisible” and with a cover of “Inner City Blues” from the legendary father of Soul and Funk Marvin Gaye. “Program” features some Rap blended with the bands famed Hard Rock sound. Speaking of Rap, Living Colour pays tribute to a Rap legend and adds the Hard Rock element by covering the late, great Christopher “The Notorious B.I.G.” Wallace with “Who Shot Ya?” They also feature some Funk with “Blak Out.”

Reid creates a Blues-Rock solo and transitions with some Jazz in “Who’s That?” Reid also blends some trumpets, hip-hop, and Funk in the form of an organ-keyboard, and lay out the rest with some Hard Rock. This album closes out with “Two Sides” which, albeit slow, feels like a nice closer to an album that contained a medley of musical influences. This album was a pleasant surprise and felt like a comeback album for this famous group.  Check it out and get your copy here to see what the Klown is talking about.

This Album had Shades and was a Cult of Personalities

Ah, Cannabis Corpse. The band originally founded by members of Municipal Waste, GWAR and Antietam 1862 which is also a name that has confused inattentive metalheads since 2006. The stoner themed death metal band from Richmond, VA has officially released their fourth album Left Hand Pass through Season of Mist Records. Let’s just say that this album kicks off in a blaze of glory with “The 420th Crusade.” Ray Suhy starting off this track with a slow guitar riff that paces a bit with some reverb and immediately picks up speed for some death metal bliss.

Phillip “LandPhil” Hall showcases a bit of Muni Waste’s influence in the beginning and continues with some death metal depth afterward to “Grass Orbit.” Going back to the Cannibal Corpse bit, the trio features some of those sounds and that of Nile’s with “Left Hand Pass” and “Effigy of the Forgetful.” Speaking of Nile, the band, in comedic fashion, take a page from Nile in the sense of storytelling with the short titled “Papyrus Containing the Spell to Protect Its Possessor Against Attacks from He Who Is in the Bong Water.”

This album finishes with “The Fiend That Come to Steal the Weed of the Deceased” which was a pretty good closer. The track starts off rather slowly and remains at the same pace toward the last minute which picks up a bit of speed towards the middle of the song. This album made a good impression on the Klown and has met the hype that the album was receiving prior to this. Lastly, you can check it on the label’s Bandcamp to check it out for yourselves.

6 out of 6 This Album is Brutally Lit! 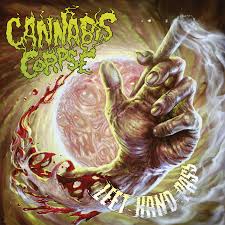 Warning: This Album was Lit and Will Leave YOU Hungry for More