Veil Of Maya Releases Albums For their Nonbelievers

The Chicagoan quartet has returned with their sixth release False Idols through Sumerian Records. The contemporary marks the end of their 2-year hiatus and unlike the years prior, the band has decided to feature more DJent than the metalcore brand they’re used to strutting.

The album opens with the brief intro “Lull” and immediately transitions with “Fracture.” The song is a prime example of the DJent subgenre adopted by the band and the song features erratic guitar play and programming by Marc Okubo with some double kick action from Sam Applebaum. Another good example of docile DJent influences are  “Whistleblower” and “Graymail.”

The band returns to metalcore with “Doublespeak” which featured Lukas Magyar clean vocals a bit more. The same could also be said about “Overthrow” and “Echo Chamber.” The bassist Danny Hauser shines really bright with the tracks “Pool Spray” and “Manichee,” his bass sounds similar to that of Meshuggah’s Dick Lövgren.

The latter features Magyar performing nothing but clean vocals as opposed to incorporating some growls in between. “Follow Me” has the band feature some subtle deathcore. This album caps off with “Livestream” which has the group featuring more metal than DJent but still features some core nonetheless.

This album was a bit of a surprise since it showcased the band experimenting a bit before completely taking the DJent banner. The Klown is definitely not a fan of VOM but will admit that this contemporary was alright. The Klown felt like this album was used as a lure for those who are legit fans of DJent but also made sure not to exclude their faithful fan base. You can check this out on Spotify or take the plunge and get it here.

3 out of 6, The Veil Has Been Lifted for the Nonbelievers

Trivium Shall Punish The Non-Metalheads

Last year the Klown featured this quartet’s EP/reissue. Now they make a return this year with their eighth album titled The Sin and The Sentence which was released through Roadrunner Records. For those still suffering from the In Waves PTSD, this album features more of Matt Heafy’s screaming vocals mixed with his strong thrash and groove style.

“The Sin and The Sentence” is a really great example of this return and happens to be the first track of the album and so were “Betrayer” and “The Wretchedness Inside.” The former would contain clean chorus vocals from Heafy, guitarist Corey Beaulieu and bassist Paolo Gregoletto.

“Beyond The Oblivion” feature some groove metal which is something that the band is not normally known to do. In “The Revanchist” the band takes on thrash and Heafy lays out aggressive clean vocals but, for the most part. The backing vocals, on the other hand, features growls and other range of vocals. The album caps off robustly with “Thrown Into The Fire” and features Beaulieu’s powerful opening guitar riffs and some awesome solos.

The album, aside from the tracks that were mentioned, doesn’t feature much that stands out. The one thing the Klown can say is that Heafy and company may have decided to revisit the old sounds from the Shogun album combined with Silence In Snow. For the dedicated Trivium fan, this is good news. The Klown actually enjoyed the album and it felt nice to hear some new Trivium. You can get your copy here and check out this potential comeback.

4out of 6 Move Over TriviuT, Trivium Has Returned

Not sure what that is but TriviuT is oust!

Xipe Totec Are On a Role with Their Newest

The Aztec death metal duo known as Xipe Totec have been on a releasing spree as of late. The Klown regrettably didn’t get the chance to check out their previous release four months prior. So without further ado, the fifth release is titled Axomimitl  through Defox Records.

The album kicks off with some Nahuatl spoken word with the sounds of tribal drums courtesy of Martin Martinez which would transform straight into some brutal death metal with “Cihuateteo.” The song would feature Martinez’s all around instrumental prowess with Alejandro Camacho’s aggressive growling vocals. The same concept is featured “Ahneli Tlahtolnemiliztli” but instead of Nahuatl, it would be a Spanish narrative instead.

“Axomimitl”  and “Tonalyecantoc”on the other hand, turns a 180 and feature sounds similar to that of Behemoth mixed with Aztec flutes, drums,  a rain stick, and a killer guitar solo. The band features deathcore in “Cuauhxicalli” and “In Mimiqueh in Tlatohl,” the latter would feature some tribal drums. The band showcases some brutal death metal with “Miquitohtl.” “Tlachihualiztli” was more on the technical death metal side and featured  Aztec flute aside from the tribal drums.

The album closed with “In Tequihuahyotl Itlantica” which was an outro that featured Spanish and Nahuatl narratives with the same native instruments mentioned earlier and included soothing acoustic guitars. This album was a pleasant surprise and totally different. Usually Ugh Metal is pretty good at finding you a link  to purchase these albums, depending on your perspective,  BUT this band has this album available digitally through all major sources such as Amazon, the Apple or Google store.

6 out of 6, No Human Sacrifices Needed 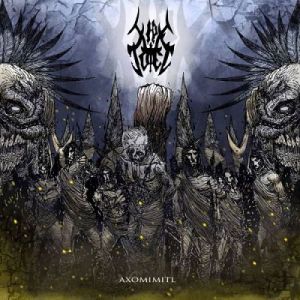 Not Even Trump Can Stop this Mexican export

GWAR Has Emerged from Metal Valhalla with Latest

C: The Klown isn’t entirely 100% for this but he supposes he can share this segment. This album, The Blood of Gods,  is and was highly anticipated. After all, GWAR’s future was uncertain since the unfortunate passing of frontman Oderus Urungus because of Mr. Perfect… the futuristic creature, not the late great wrestler Curt Hennig.

J: Sharing is caring, ya filthy Klown! GWAR is back baby!! And no force, nor selfish Klowns nor evil creatures are gonna hold these scumdogs back or the J-Ohster from throwing in her two cents! The scumdogs from Planet Home are ready for battle right in the beginning with “War on Gwar.” I especially love those Black Sabbath-esque riffs Pustulus Maximus slapped on this track.

C: Talk about the soundtrack to our doom. Either way, it sounds kinky as hell. The Klown loves the catchy and groovy sounds of “Viking Death Machine.”

J: Ah yes! This track was on fire! It was a lot more lit than my mixtape! And my mixtapes are pretty bitchin’ and totally available if any of you want ‘em *winks* Hey Klown, GWAR gives a little shout out to your fave rancid Cheetoh humanoid.

C: Ah yes… the clown president gets a tribute song “El Presidente.” You know greatness is yuge when the scumdogs of Planet Home already made a song celebrating the greatness that is his duty!

J: Giving rich Cheetohs like him “taco salad” induced diarrhea? That is true! Like we need more reasons to crash in his golden pad when we were on our fancy Vegas trips. Not all heroes wear capes, some wear orange toupees. But enough about your clown in arms, and let’s talk about the legends. GWAR took a stab at ACDC’s “If You Want Blood (You Got It)” which we had the pleasure of seeing it live at this year’s Warped Tour. Also, I gotta say this Klown, but their latest hit “I’ll Be Your Monster” is an instant classic and dare I say it reminded me of a rougher version of a Lordi song.

C: One of the things the Klown enjoyed about this album was a revisit to their punk rock roots with “Auroch” which was pretty awesome. To quote the old timers,  you can “slam dance” to this. They even picked up the pace for a Sunday special just for us heathens with “Crushed by the Cross.” Of course, they provided a perfect song for when we feel like when we no longer live on this planet anymore.

J: Speaking of revisiting, GWAR pumped out another beautiful ballad “Phantom Limb.” *Tears up* This is an ode Oderus would approve. Oh gaaaawd! It was love at first “Play,” who said these Scumdogs don’t have feels?! Hands down, one of my fave songs from this album.

C: Yeah… it was the first time GWAR made the Klown feel the feels. The Klown was glad he waited to see what meaningful tribute the fallen leader would get with adequate time. This album was worth the ear, the wait, and emotional investment. The void is there, sure but Blothar did Oderus proud filling in and leading the pack to further glory. If you want to disprove the exaggeration and be a good bohab and look up Metal Blade Records Bandcamp to really check out The Blood of Gods.

Nectar of the Gods!