The Klown has delivered by feeding the Ugh Metal fetish, once more! The Hungarian quartet known as Nemere have debuted their first studio album titled Vérmező, independently. That’s right, kiddies an independent act and they are black metal. This unconstrained release kicks off its inauguration with “A Múlt Kapuja (The Gate of Past)” and right away it features some pretty aggressive and fast-paced black metal like 1349 or a fast version of Highland.

“Harci Dal (Battle Song)” does justice to the song by first introducing the sounds of marching drums courtesy of G.J. and then followed up by some strong guitar riffs and backing growling vocals from V.T. to accompany frontman V.ZS’ harsh vocals. The quartet continues the battle theme with “Végső csatánk Veszni látszik (Our Last Battle Seems to Gone)” which can be described as a 5-plus minute of intensity that is somewhat reminiscent to that of Helheim.

“Vízió (Vision)” starts off with some slow guitar riffs and builds up right away takes you to some raw black metal bliss.If you enjoy the sounds similar to that of Watain, Nemere’s “Az éjszaka Holdja Alatt (Under the Moon of Night)” and “Vérmező (Bloodfield)” demonstrate that they can give you a quick fix without having to wait too long for new material. The album finishes with “Utolsó Utam (My Last Journey)” which has a similar intro  as the first track  but slows down and picks up again with V.T.’s guitar riffs towards the end of the song.

This debut was a pretty good start for this band and clearly features their influences well. The Klown recommends this album for fans of Watain, Helheim, 1349 and Highland. If you consider yourself “trve” this would be an album you may want to consider listening to. You can check out this album in their Bandcamp.

5 out of 6 Straight Outta Transylvania

The blackened death metal trio show us how India brews their metal in their latest Primal Incinerators of Moral Matrix which was released via Iron Bonehead Productions. The album starts with “Hyper-Spacial Mandala of Intuitive Latencies” which contained spoken-word and distorted chants to set the mood before transitioning to “The Prognosticators of Trans-Yuggothian Meta-Reason.”

“The Prognosticators…” would be best described as a mix between Full Of Hell or Nails with some blackened death metal influences. The song features really harsh growling vocals mixed with some auto-tune to give a muffled effect the way black metal sounds like at times.“Radicalized Matrikavyeda Operation: Militarized Cosmogrids Destabilization (Heralding Absolute Contraction)” and “Cyberserking Strategic Kalpa-Terminator (Advance Acausality Increment Mechanism) took a complete stance on the blackened death metal like that of Hellfire Deathcult.

“Transcranial Ka’abatronic Stimulation Collapse” serves as an intro to “Intra-Dimensional Vessel of Were-Robotics, N-Logics and Assorted Latice Intelligence” sounded like old Cannibal Corpse with Chris Barnes. The album caps off with a one-two combo of “Imperial Cyanide Voltigeurs (Quantum Threshold Leapers of Hatha-Sorcery)” serving as the blackened death metal catalyst to “Dismal Ramification of Mathematical Marmas and Sandhi” which followed the same effects as in the first track.

Aside from being a mouthful, the album was a pretty good start for this Indian trio and will give you adrenaline for days. The Klown highly recommends this album for those who fancy Hellfire Deathcult, Archgoat, Full Of Hell and Nails. You can check it out and get it here. 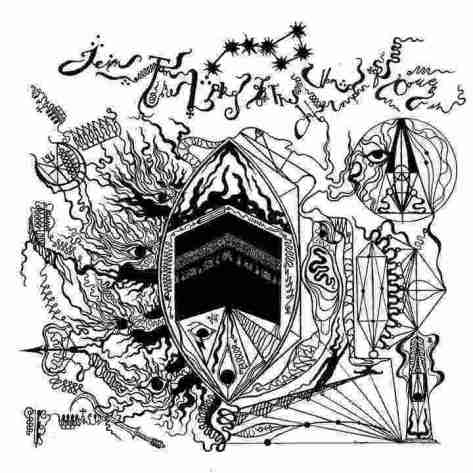 The legendary punk band from Pittsburgh is back after a two-year hiatus with American Fall and it was released through Spinefarm Records. The Klown was glad to hear that Anti-Flag was back and just as angsty as ever. The album fires away with “American Attraction” which gives you a bit of a radio-friendly version of punk like other American punk greats such as Bad Religion and Social Distortion. Other songs that can be described the same but with a bit of oomph are “The Criminals” and “Trouble Follows Me.”

“When the Walls Fall” features the band taking a page out of Rancid book and features some ska influences with their punk. Much like Rancid’s songs, they are catchy as hell but they also provide a message. “Finish What We Started,” aside from being a forerunner for the Ugh Metal theme song for the upcoming Christmas shopping, features Chris “Chris#2” Barker’s bass heavily and a powerful harmonic chorus from the whole band. Barker’s bass once again shines with the fast-paced “Liar.”

“Digital Blackout” and “I Came. I Saw. I Believed,” feature some aggression but remain friendly to the ear with a very harmonic chorus and frontman Justin Sane and Chris Head’s infectious guitar riffs. “Racists” and “Throw It Away” exemplify the spirit, message and sounds of punk. The album finishes strongly and appealingly with “Casualty,” contains a very melodic chorus line, some gnarly guitar riffs and Pat Thetic’s drumming and cymbal’s clashing to go along making a perfect blend.

The Pittsburgh quartet proves that although they were busy fighting for social justice and equality, they can still  provide material powerful to bait and hook you. Anti Flag even managed to make their two-year hiatus seemed shorter than what it was.

The album was a pretty good surprise and served as a great soundtrack to express themselves given that the one year anniversary of election day was a few days after. Nevertheless, no matter what your feelings are about E Day, you can get this album here or don’t. The Klown doesn’t feel like he should say it but if you love punk, you’ll love this.

6 out of 6, The Soundtrack for Present America 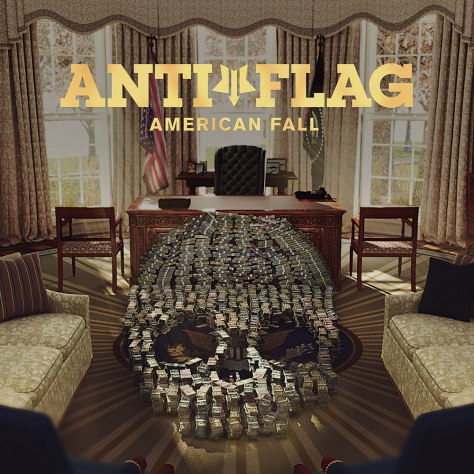 Moonspell Memorializes its Past with their Contemporary

Portugal’s national treasure has resuscitated from their 2-year temporary extinction and has released a brand new album for the masses. Y’know because of the title of their last album was called Extinct? Anyway, enough of the Klown’s failed attempt to be witty onward to 1755 which was released through Napalm Records.

The Portuguese quintet, unlike before, has taken a step back to their roots by singing in Portuguese and produced a memorial to a tragic past in their homeland’s history. The brief history lesson is that of the Lisbon earthquake of 1755 which not only devastated Lisbon but other parts of Portugal, Spain and Morocco. This 8.5-9.0 earthquake then caused a tsunami that affected the UK and Ireland.

The album begins with a theatrical opening song titled “Em Nome Do Medo” which was had a great use of overture and church-like choir alongside with frontman Fernando Ribeiro. This would serve well as a built up, and dramatic intro into “1755” which sticks with the theatrics, and has keyboardist/programmer Pedro Paixão busting out some middle eastern samples. The song also features some awesome guitar play and a solo from Ricardo Amorim. “In Tremor Dei,” “Evento” and “Ruínas” feature some Gothic metal similar to that of their Memorial.

The band dedicates the actual date of the event with the symphonic, theatrical Goth metal song “1 De Novembro.” The song features Ribeiro singing with clean screaming vocals, with the occasional growling vocal in between, sounding like someone in agony. Amorim does another great guitar solo as well. This album concludes with “Lanterna Dos Afogados” which is best portrayed as a dark ballad… or so the Klown thinks.

As a bonus, if you couldn’t get enough of “Desastre” this metal Muzzy treats you to a Spanish version of the song. The Klown will not oversell this album too much for you but he’ll just say check this baby out and take the plunge here. 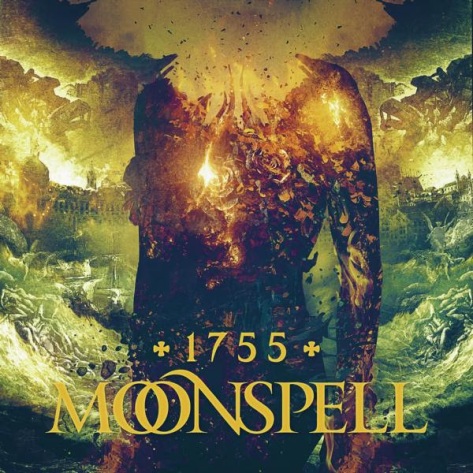 Cannibal Corpse… what more can be said about this legendary death metal band? The Klown supposes that he can talk about their latest album Red Before Black which was released by Metal Blade Records. On that note, their 14th release produces an aggressive Cannibal Corpse which sounded much angrier than the last couple of releases. At least that’s what the Klown thinks.

The album commences this bloody saga with “Only One Will Die” which was a really strong and aggressive beginning to get any death metal fan completely invested. The song also featured a pretty awesome solo by Pat O’Brien and the same can be said about “Red Before Black” and “Heads Shovel Off.” The band take it back to the last albums and features the heavy sounds mixed in the intro of the song before transitioning to the erratic sounds that gave them fame. This can best be heard in “Code Of Slashers” and “Remaimed.”

The Klown found another favorite Cannibal Corpse song, the very PG titled “Shredding My Human Skin.” The best way that the Klown can describe it would be if “Evisceration Plague” picked up the pace to match the intensity of Kill but is slow enough to allow bassist Alex Webster to add some intensity. Webster shares the spotlight with O’Brien where he gives us the gratuitous solo.

If you really want something similar to that of Evisceration Plague, however, then you will definitely like “Firestorm Vengeance.” Another favorite of the Klown was “Scavenger Consuming Death,” which is also worth noting that Webster had a solo of his own in this track making this song more interesting and good. This contemporary ends strongly with “Hideous Ichor.”

Not much else to say about this album other than it was a pretty awesome album and if you fancy yourself a hardcore Cannibal Corpse fan then it’s a must-have album. You can lend it your ear on Metal Blade’s Bandcamp and buy it there. 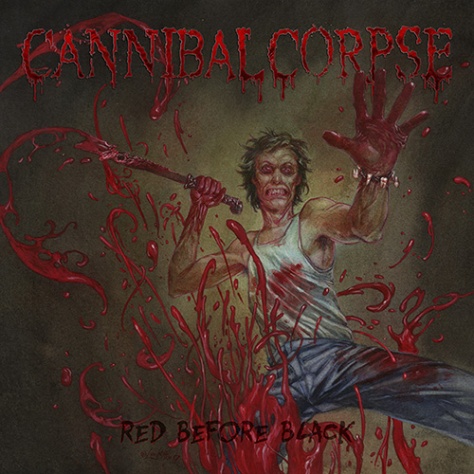