The Seattleite quintet known as Demon Hunter has returned with Outlive through Solid State Records. “Trying Times” builds up enough hype making it a suitable intro and complimentary transition to “Jesus Wept.” “Jesus Wept” was simply a good metalcore song to listen to and really shows off Tim “Yogi” Watts mastery of the drums along Patrick Judge’s killer guitar solo. “Cold Winter Song” caught the Klown off guard a bit because the opening riffs of the song sounded similar to that of Arch Enemy’s legendary sound but transition to smooth metalcore song.

“Cold As Blood” gives you a touch of aggression and eases up with the chorus while “One Less” stands as the “true” metal song of the album because the group has a dominantly aggressive approach. “Slight The Odds” features some classic strings throughout the song making it more melodic and add some speedy drumming and heavy-speedy riffs for a touch of aggression in middle. The deluxe edition of the album features two extra tracks “A Fear I Used To Know” and “Savage.” This was not a bad album to check out and it was quite good. No matter what your feelings are on Christian metal or Christianity, the Klown guarantees you that you will not be converted upon listening and it’s not preachy.

The Klown believes that Mastodon made an appearance in Ugh Metal back in late January regarding the same album he’s about to review. With that said, the Georgian quartet has released their 7th studio album, Emperor of Sand through Reprise Records. Unlike your run of the mill prog metal bands, Mastodon usually represents an aggressive version of prog. On that note, “Sultan’s Curse” kicks you off with their style of prog. The Klown was surprised with “Show Yourself” because the band does a 180 from their usual M.O. and sound similar to Queens of the Stone Age in terms of sounds but not vocals. In fact, the Klown was rather impressed by Brent Hinds and Brann Dailor’s pipes because they were a lot smoother than he thought.

By the time “Roots Remain” (“Eons” if you happen to acquire the vinyl version) commences the band kind of returns to the sounds they are known for with the addition of some clean vocals, Hinds’ killer guitar solo and pianos toward the end. “Word to the Wise” really has the band return to their signature sounds, vocals and two awesome guitar solos from Hinds. “Andromeda” and “Scorpion Breath” were awesome tracks and feature the band’s usual M.O. in terms of their brand of prog: aggressive and melodic with some chorus and minimal clean vocals. “Jaguar God” close out the album with a soothing and harmonic touch, Mastodon style.

5 out of 6, Sand Castle Not Included

Bodycount Want Blood with Their Latest

The Klown was a little giddy like a schoolgirl when he heard that Bodycount was making a new album. The highly anticipated Bloodlust has come out through Century Media Records and the Klown was not at all disappointed. “Civil War” gave this rap metal masterpiece a powerful start, and served as a powerful statement with the feeling of today’s political climate and was enhanced by Megadeth’s Dave Mustaine powerful guitar riffs. “The Ski Mask Way” and “This Is Why We Ride” reintroduces the 90’s fusion of gangsta rap and metal the way Ice-T did with the first Bodycount album of “Cop Killa” fame. “All Love is Lost” features the Brazilian metal god, Max Cavalera, lending his powerful vocals to accompany Ice-T’s legendary rhymes to make a really powerful track.

This album also treats us to a cover of Slayer’s “Raining Blood/Postmortem” and, as if it wasn’t impressive enough, Ice-T manages to make it a bit more aggressive and has bassist Vincent Price take over on vocal duties towards the end. Another awesome treat was hearing Lamb Of God’s prolific frontman, D. Randall Blythe in “Walk With Me…” (which really sounded more like Ice-T was featured in a Lamb Of God track) either way, just the thought of that had the Klown on a metal high! Lest the Klown forget about “No Lives Matter” and “Black Hoodie,” they were awesome and served as a cold hard slap of reality on how we as people could dilute real issues in order to disguise our apathy towards other human beings. This album was not only awesome but it also justified the hype and attention it received! The Klown highly recommends you get your ears on this album.

6 out of 6, Ice-T Still Dishes Out the Cold Hard Truth

The thrash quintet known as Warbringer have graced us a brand new installment titled Woe to the Vanquished through Napalm Records. Let the Klown say that if you seen these gents live or if you have heard their stuff before, you will not be disappointed. “Silhouettes” has a good start but “Woe to the Vanquished” was a better follow up and immediately gives you some thrash metal bliss. The Klown loved their new timeless classic, “Remain Violent” because not only was it thrash-tastic but it was an anthem which also features John Kevill’s vocals matching the instruments’ intensity. The Klown could say the same about “Shellfire” when it comes to intensity and also features a killer guitar solo.

“Descending Blade” was awesome and pays homage to the Bay Area thrash scene and sounds like a lost Exodus song if it featured an aggressive sounding Mark Osegueda of Death Angel fame. The Klown wouldn’t be surprised if “Divinity of Flesh” were to become the new single in the near future because it’s good in the sense of speed, rhythm and it’s catchy as hell. Lastly, the band joins Metallica in the 11-plus minute club with “When the Guns Fell Silent” which gives you a toned down yet aggressive melancholic thrash song. This was a really good album and serves as a great breakthrough, the Klown believes that this album will serve as a catalyst to enhance the band’s profile.

6 out of 6, There’s a War Coming and They Got the Big Guns

Jasta Writes A New Chapter in His Metal Saga

What do Hatebreed, Kingdom of Sorrow, Connecticut and MTV’s Headbanger’s Ball circa 2003-2007 have in common? Read the title! It seems that Jamey Jasta never ceases to amaze the hardcore faithful. Jasta released his sophomore solo album The Lost Chapters through Martyr Records, right before Hatebreed’s The Concrete Confessional’s 1st anniversary. “This Is Your Life” kicks off the album and brings the noise to get you invested in the album. Speaking of Hatebreed, “Back to What Matters” and “Deadly Business” felt like rehashes or leftovers from the last Hatebreed album… not meant to be a bad thing, the Klown enjoyed them.

“Parasitic” features Jasta dishing out a furious but melodic dose of hardcore much like “Until We Bleed Again” with the contrast of the song being harmonious by comparison. Jasta collaborates with ex-Killswitch Engaged and current Devil You Know frontman, Howard Jones as backup vocalist for “Chasing Demons” to make a rather melodic song. Lastly, Jasta covers Black Sabbath’s “Buried Alive,” it wasn’t bad but the Klown just didn’t know what to expect. The cover sounded rather belligerent but melodic than the original. Finally, on 1 April, Jasta didn’t mess about and released the album through his bandcamp. 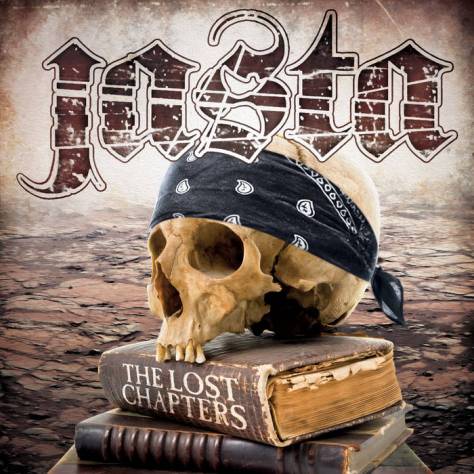