Prong returns with their 12th studio album Zero Days via SPV/Steamhammer records and this album is here to make an impression. Now the J-Oh’ster (Klown, c’mon tell me if I’m doing this right!) must admit the first track “However It may End” made the J-Oh think she played a new Slipknot track minus the beep-beep-scratch sounds…Have those green Cali fumes FINALLY messed with yours truly?! Don’t know. The title track will make you grab your shit and run and start your own rebellion. Great track! Which is complimented by “Divide And Conquer,” where Tommy Victor shows off his nice set of pipes in the chorus and also keeps shining in the angsty ballad “Blood Out Of Stone.” *replays* They get it! They get me!

Now Prong is not one to shy away from in-your-face tracks or songs about how they are being wronged! NO!! They throw “Self Righteous Indignation” right at you, which prowls with a calculating pace rather than charge right at you. RAWR! Want something more serious with a foreboding sense of doom? “Wasting Of The Dawn” and “The Whispers.” Victor’s vocals AND riffs continue to shine along with the Art Cruz’s definitive drum pounding and the base foundation from Mike Longworth. It should be a crime that the J-Oh’ster FINALLY mentioned Victor’s riffs ‘cause he’s not just a pretty voice!

This album will more than suffice the Prong lover and will cause a nice head bopping for the casual metalhead. Though yours truly is not an avid Prong follower, the J-Oh’ster’s gotta admit that this was a very nice personal buffer between listening to tar black metal, decaying death metal, grimy industrial tunes, and the magical wonders of Loreena McKennitt and Bjork. That’s right kids, there’s no in between with the J-Oh’ster and she can go on and on! So with that being said, Zero Days provides that pleasant middle ground for anyone. Be sure to snag a copy of this baby before you head in to your bunker here and bask it in.

5 Out 6, The Final Countdown Was Good!

Alice Cooper Conjures Up The ‘Paranormal’

The father of shock rock is back to show us a whole new type of nightmare with Paranormal via earMusic Records. Alice Cooper kicks off with the title track which has a nice and acoustic riff before the brief and epic electric riffs strike you down. The title track has an appropriate feel as the intro track because it has a haunting and welcoming tone and Alice Cooper’s melodic vocals will stay with you.

The sextet switches gears with “Dead Files” and “Fallen In Love” which had some faint bluesy overtones which was awesome. Now there’s a very special guest in “Fireball,” and you are right it is the organ! Why enjoy this so much? Because it made this track so much stronger. Why is the J-Oh’ster too excited over the organ? Because shut up that’s why.  which for some reason amuzed me and we hear a guest appearance from the organ in “Fireball” which makes this baby sizzle. The boppy and rebel with a cause “Genuine American Girl” is the track that will steal your heart and break it before taking off to Broadway.

Alice Cooper revisits some of his older style in vocals and sound in “Paranoiac Personality,” “Private Public Breakdown.” Cooper adds a little bit of bluesy noir to his rock n’ roll in “The Sound Of A,” which the J-Oh’ster must admit is her favorite song of this album. This legend flirts with different musical influences without straying away from his classic and signature sound. Paranormal will make a believer out of you and is sure to appeal to the youngins. Contact and receive your copy with open arms here.

‘Ultu Ulla’ Is A Different Kind Of Species

We’re going to Saturn, dude. To the Rings Of Saturn to be exact!  And you bet we’ll be blasting their latest Ultu Ulla which made its way out in this universe via Nuclear Blast Records. Those beginning riffs from guitarists Lucas Mann and Miles Dimitri Baker in their first track “Servant of this Sentience” heighten the anticipation of what’s to come in this album and deliver a track that flows nicely.

“Parallel Shift,” however, shakes things up with their tempo and even throws in some good ol’ keyboards adding that a faint sense of mystique considering we’re breaking supersonic barriers in this journey! Now these guys don’t just stick to the brutal side of things and add some spice to this album. Nope, these guitarists add some pizzazz to this album by showcasing their strumming chops and give us a great acoustic intermission in “Unhallowed” and the pleasant and epic instrumental “The Macrocosm” where they mix some technical and brutal influences with acoustic elements, and lest we forget the predominantly acoustic snippet in “Inadequate.”

Rings of Saturn don’t just remain in the deathcore side of the spectrum and dabble in a lot of technical death metal influences in Ultu Ulla. This album is a different species that is in the middle of evolving from its previous form.  The Bay Area quartet are ready to hunt and convert new fans with the new influences they are playing with. Book your ticket to Ultu Ulla here and prepare to get your mind blown.

6 Out 6, I Have A Feeling This Isn’t Just Deathcore Anymore 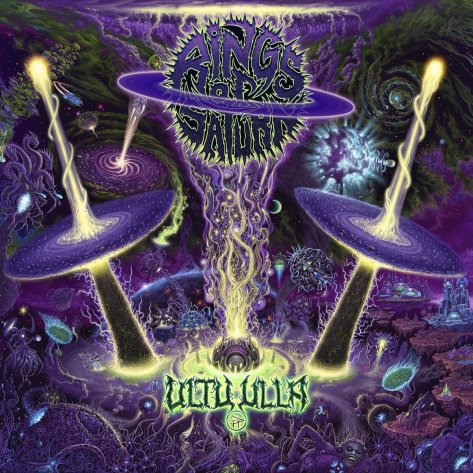 *Look what I found at the bottom of my Comic Con bag! That lil sneak!*

Mosh to ‘The Overlord Messiah’

Nearly three decades later, David DerMinasian, ex-member of 1988’s AVATAR (no not James Cameron’s blue man group or the eccentric Swedes), not only returned to the metal scene with a new band called Retched (pronounced “Retch” ‘cause they’re cool like that) BUT they also released The Overlord Messiah via Alone Records on July 21. Something worth noting about this EP is that it was recorded as AVATAR in ’88 before they split, and the former member had to sit on this record until last year when he released it through Bandcamp. Do we need more reasons to love Bandcamp!?  The Greek record label then swooped in and released it to the masses last week.

Flash forward to 2017, where the two piece SoCal thrash band not only delivered a big surprise to their faithful legion but also have the potential to wow thrashers and casual listeners alike. “Black Leather And Me” is the perfect 80’s montage music for a metalhead and oozes that OG coolness. “Insane” and “Lost In The Night” will make you wild with their intro riffs and don’t even get me started about that breakdown!

The title track “The Overlord Messiah” lives up to its name and is a divine ruler no one would dare challenge! Yours truly can continue breaking down all six tracks of this EP but yours truly has said more than enough. It would have been a sacrilege of metal proportions had this EP not made it in to our ears. The multi talented DerMinasian’s voice is a whole new level of heavy metal magic, not that the J’Oh-ster is downplaying his riffs.

With Retched due to release a full length album in Nov. 2018, we can’t wait to see what this duo will produce in their new chapter. Become a believer and get it in their bandcamp OR get the sweet bundle pack at Alone Records’ site.